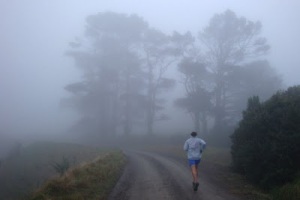 Have you ever sat in your car very early on a cold morning, looking at the start banner of some or other race, steaming up the windows while the rain is pouring outside, thinking to yourself, “you have to be crazy to be here right now…” In fact, probably all non-runners, including your family, will consider you stark raving mad.

On one such occasion, haven pre-entered for a half marathon, I remember us sitting there with the car’s heater on full blast, just looking at each other. We knew exactly what the other one was thinking. But as more people were leaving their warm, dry, protective cars and making their way to the start, we realized (as my mom always says) “you won’t melt”. And what doesn’t kill you, makes you stronger. Besides, we knew very well how we would feel two hours later, having completed the 21km run as apposed to bailing out and going home.

So we stepped out the the car and into the rain, joining the rest of the runners huddled together under the start banner – a seriously sorry looking bunch. As we got wetter, everybody started to see the humor in the situation. The gun went off and we were on our way. After about a kilometre we were soaked to the bone. Every now and again one had to dodge the puddles in the road, while others were going all out, jumping and splashing in them like crazy.

And then, after 10 minutes, the rain suddenly stopped! The remainder of the race turned out to be one of the greatest runs weather wise that we could ever have hoped for. Cool and overcast with the sun peeping through the clouds every now and then. We could run ourselves dry and I was thinking to myself that all the participants who decided to rather go back home to their warm beds must be so disappointed with themselves.

But that’s life, and the choices we make – to this day I am glad that we chose to be part of the crazy bunch!