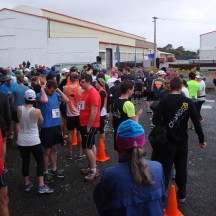 Shortly before the start. 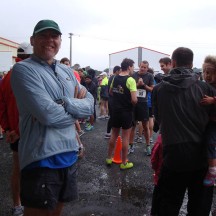 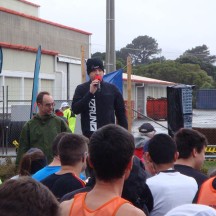 Briefing by the Race Director.

The buildings provided some welcome protection against the worst winds as we ran through the industrial areas of Lower Hutt. 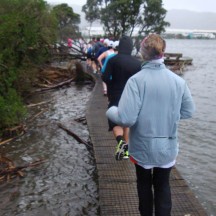 A nice surprise for us out-of-towners not knowing what the course looks like. A small section on a walkway in the sea. 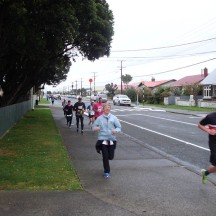 Still going strong in the suburbs.

Gerry on the bridge.

From about the 5km mark we ran on the pathway next to the Hutt River. 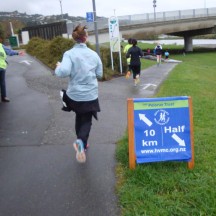 A little downhill passing under the bridge for the 21.1km runners. From here the half marathon runners did an out-and-back stretch next to the river to make up the extra distance.

Nice to see an HHH in the club, doing the signage. 🙂

Lovely scenery next to the river.

The route is a combination of on-road and off-road sections. This is shortly after the 8km mark, as the front runner came screaming back past us towards the finish.

Not far to go to the turn-around point at 11km. 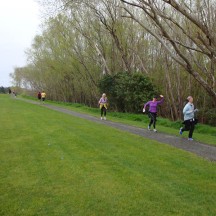 A friendly wave for the photographer.

Finally on our way back.

The wind got progressively worse on the return-leg next to the river. Maybe I could fly back?

We spotted another Manawatu Strider on the course. 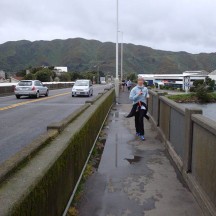 Only one kilometre to go. I was knackered and gutted when I realised I was yet again going to miss the elusive 2hr target.

This has got to be our race of almosts. Firstly I yet again missed the two hours mark with less than a minute (39 seconds, to be exact – too many photo breaks, perhaps?). Secondly Gerry’s name was drawn as “first back-up” to the winners of the major spot-prize (7 days’ accommodation at Rarotonga), meaning that, unless one of the actual winners decided not to take up their prize, we only just missed out on a great island holiday. So close. On the plus side, if any of the actual winners decides not to use their prize for whatever reason, we’re up for a cool holiday – fingers crossed! END_OF_DOCUMENT_TOKEN_TO_BE_REPLACED 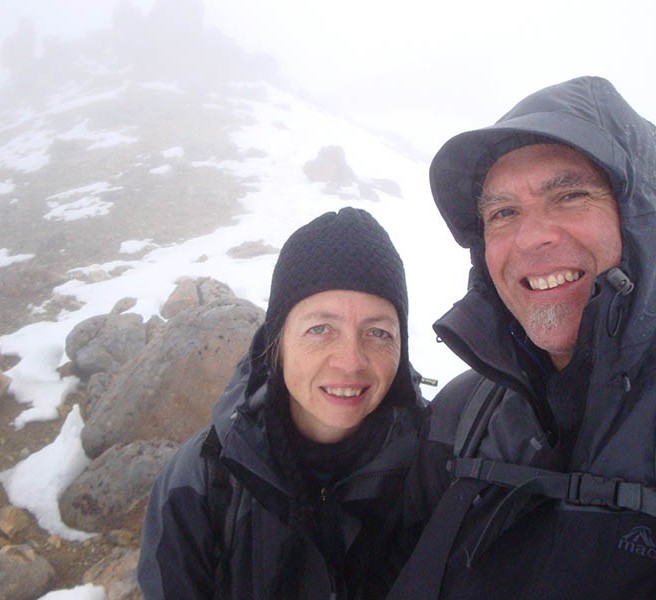 Glasses would have helped to combat weary eyes, protecting them from the cold. 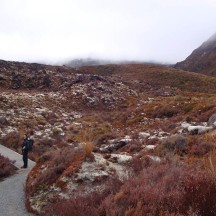 The cone of Mt Ngauruhoe is hidden in the mist in the back.

The first few kilometres of the path is well built and maintained, to help combat erosion.

First bits of snow visible as we make our way up the mountain. 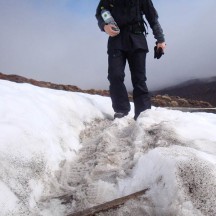 A bit of sludgy snow. 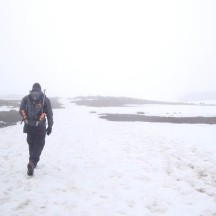 The start of the final 1.5km to the top of Mt Tongariro. 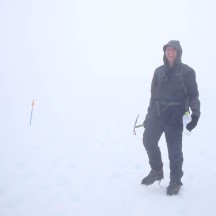 I guess this is what is called a “white-out” – when mist and snow become one and you can’t see the horizon or anything other than white. 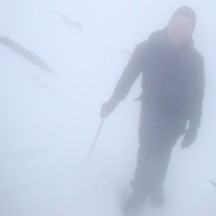 The narrow slippery path on the side of the mountain got a bit scary at times. 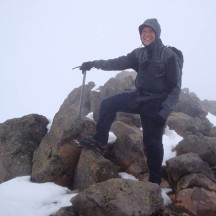 Gerry at the summit.

Still up for a bit of fun.

Not sure why I decided to have a little sit at this point.

The beacons still visible, this one buried rather deep. 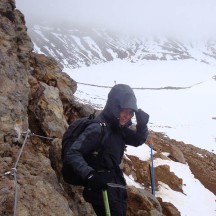 Mainly off the snow – heading down to South Crater.

The wind threatened to blow me off the mountain.

Minus seven degrees Celsius is rather cold.

Stopping for a bite to eat and a short rest before heading down the last bit.

Having some fun in the snow. Just don’t take your gloves off for more than a few seconds.

Uhum. Just goofing around with an ice pick that wasn’t really necessary. 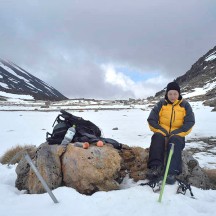 Dark clouds looming in the distance.

It is very hard to imagine temperatures of minus seven degrees Celsius, in icy winds and sleet, when you are tucked up cosy and dry in front of a fire. We were contemplating the day ahead over a cold happy hour beer in the comforts of The Park lodge in National Park Village, before turning in for a good nights sleep.

In the morning we chatted about the weather to the gentleman who prepared our breakfast – a friendly old bloke who’s probably lived around the area forever. He gave the mountain one good look as thick clouds were rolling over the mountains tops, and announced with a chuckle: “maybe your hike will turn into an adventure!”. Bummer? Yay? Always trust the local knowledge. But not to be deterred, we quickly grabbed out stuff and headed towards the Mangatepopo Road End where we parked the car for the day, hoping we might beat the looming inclement weather. END_OF_DOCUMENT_TOKEN_TO_BE_REPLACED

When you’re ankle-deep in the shit, you might as well enjoy it. 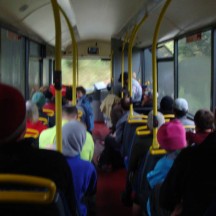 In the bus on our way to the Tora Coastal Challenge.

At the race headquarters outside Stony Bay Lodge. 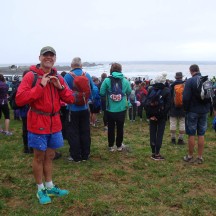 Hugging the coastline, the first few kilometres are on a dirt road. 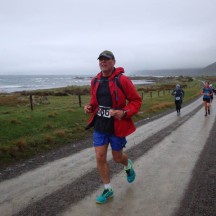 The drizzle kept us cool initially, but turned rather cold on the ridges. 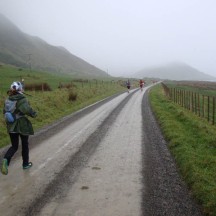 Runners disappearing into the mist.

Should have known at this point already what lay ahead.

Slippery terrain made going downhill as slow as going up. 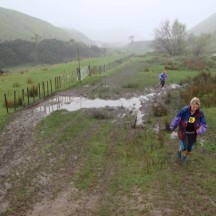 Trying to find some stable terrain next to the path.

Streams crossing the road became a blessing, cleaning out the worst mud from your shoes.

Watery mud, sticky mud, or grassy mud – you choose. Shoes staying behind in the mud was a common occurrence. 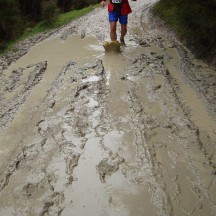 At times it seemed best to stick to the deeper water where the mud was less slippery. 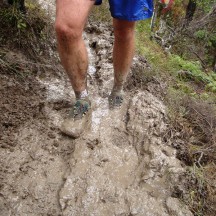 The first bit of single track – just a muddy mess.

Very slippery on the steep downhills. 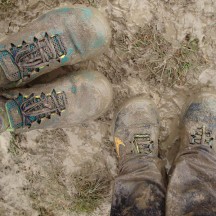 Our mud-coloured Wildhorses. These poor shoes will never be the same again. 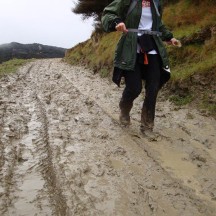 Any hikers doing the Tora Coastal Walk over the next few weeks are in for a surprise.

Gerry on his bum again. One of many falls on the slippery snot.

How do you run this? 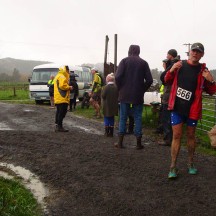 The 18km cut-off point and finish for the 18km event. 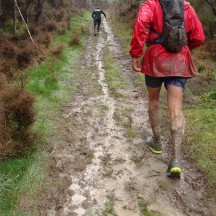 Not much left of the walking path.

Very misty and cold on the ridges.

This may have been a single track before runners created new routes to get down the hill. 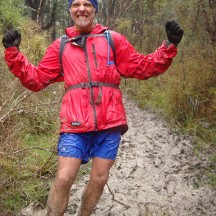 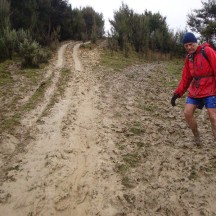 The main river crossing of the run.

A waterblaster was necessary to hose off participants before getting into cars and buses etc.

There’s no doubt that this event was a unique challenge, and something I will certainly never forget. The jury is still out, however, on whether it was a positive experience.

To be the proverbial stick in the mud (literally!), allow me to give my very subjective opinion on the event that’s now a week in the past. Just to keep the yin-yang intact, I’ll try to tell it as it was. 😉 At least my experience of the day as a very average (heck, maybe even below average), back-of-the-pack runner. END_OF_DOCUMENT_TOKEN_TO_BE_REPLACED