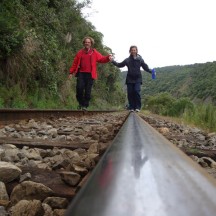 Ju-huu-st the two of us… 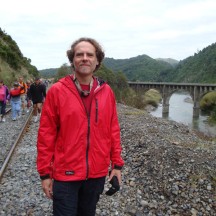 Gerry, with Ballance bridge in the back. 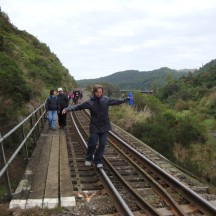 Monkey business on the train track. 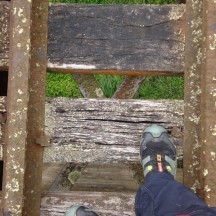 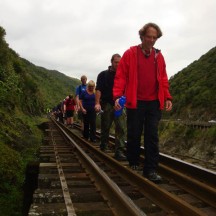 Gerry concentrating hard on another train bridge without railings. 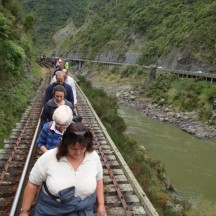 The Manawatu River quite far down. 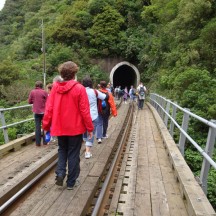 Tunnel coming up! Torches out. 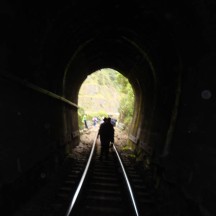 Light at the end of the tunnel. 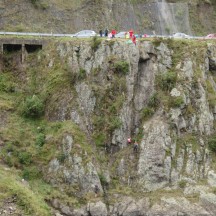 Abseilers as seen from the train track side. 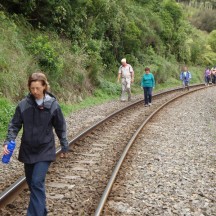 The last stretch which flattens out towards Ashhurst. 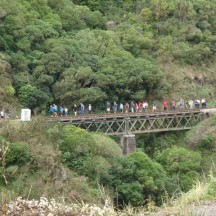 Walkers on the train bridge, as see from the road. 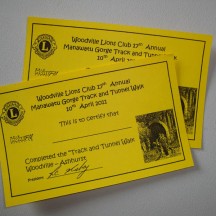 A nice touch – little certificate to show that you’ve completed the walk.

Once a year the Woodville Lions Club organise an approximately 8km walk on the train track through the Manawatu gorge, starting at the Ballance Bridge end (Woodville side) in the east and walking back to the Ashhurst Domain on the west side of the gorge.

I’ve often wondered what the gorge would look like from the other side. If you are on the one side of a river, you always long to see the other side, and vice versa. That’s life, I guess … :). We’ve driven though the gorge on several occasions by road, which is on the one side of the river, while I always look across to the train track, also carved into the cliffs of the gorge, and wonder how the graffiti got onto the concrete slabs underneath the track. With the river way below and near vertical cliffs to get to the track, the willpower of graffiti artists always amazes me.

When the opportunity then presents itself to see the river and gorge from the viewpoint of the trains, we grabbed it with both hands! No more wondering. And what a wonderful idea. Approximately 1500 people are allowed to walk on the track though the gorge, while the cars whizz by on the other side of the river.

With three different time slots, an hour or so apart, and 10 plus buses to cart participants to the start in a staggered approach, the walk is an absolute joy. The rules are quite strict: no running, no walking on the river side of the track, no hanging over the railings of train bridges, no kids under 10 years, etc.

Marshals are ample to guide and help where people might be scared to cross the train bridges. Some of the damp moss covered railroad sleepers are quite slippery. And other bridges have sleepers that moved, making it possible to climb through the bridge if you are skinny. You cross 13 train bridges in total.

Crushed rock are, apart from the wooden sleepers of the train track, the only walking terrain, which is hard on your feet and sturdy shoes are recommended. However, it is only 8km and you can go almost as slow as you want.

There are five tunnels in total through the gorge of which you walk through the longest two – the one being 597 metres long. A torch is recommended and luckily we had one between the two of us that worked. In my minds eye, I thought one would be able to see a bit of light at the other end of the tunnel, helping to at least make out silhouettes in the dark, and to find your way, so we nearly didn’t take a torch at all! In the end we had two, of which the one’s battery was close to flat. And boy is it dark in those tunnels!

The Manawatu gorge has a long history, with slips and fallen boulders causing trains to derail and plummet into the river. With the introduction of containers transported by rail in the 1970s, the bridges had to be lowered to allow for container wagons to go through. Later on the larger sea containers also had to be transported and every now and again a train would get stuck in a tunnel. So the tunnels had to be lowered yet again to provide clearance for all.

Many other accidents have occurred on the road over the years and while a vast majority of the vehicles don’t end up in the river, some do; a Newmans bus, for instance, plunging off the road and into the river, a truck and trailer unit having a mishap also ended up in the river. Divers managed to free the container and let it float down the river for extraction, while the trailer had to be towed ashore by helicopter, where it was cut in two and then air lifted to the road.

In 2004 massive floods and torrential rainfall caused huge slips, both above and underneath the road, causing a total road closure. The result being that 200 000 cubic metres of debris had to be removed from the road over a seven week period.

At the finish of our walk, every participant was handed a little finisher’s certificate, while food and other beverages were on sale at the Ashhurst Domain grounds.

A lovely event. $25 per person. Well worth the effort, and all for a good cause, with all funds raised going to Cancer Care and Local Charities.

[I’m quite stoked to report that this story made it into the Walking New Zealand magazine of March 2012 (Issue no 170, page 8). Thanks Frank!]