Gerry, me and Henriette – nervously ready for big things. 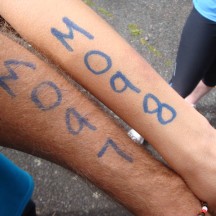 Numbered and ready for take-off!

And we were off!

Me and Henriette, still going strong early in the race. 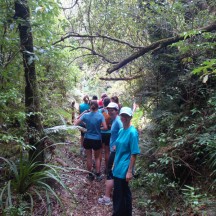 Queu at the hanging bridge.

The marshal at the hanging bridge making sure no more than four people are simultaneously crossing. 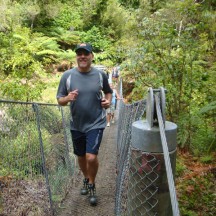 Gerry, on the bridge. 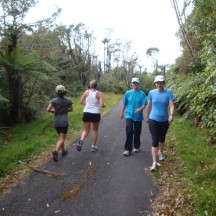 A short sealed section at the turn-around point.

Henriette on the way back across the bridge. 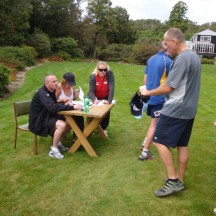 Roll-call at the finish, making sure that everybody made it safely back.

It’s been four months since we’ve done any running. I honestly don’t think the four 5km run-walk attempts to try and get us back on the road in February, counts for any level of fitness. I huff and puff pretty much like my mom’s bulldog just walking up the 50 metre little incline behind our house!

So when we visited Henriette and Deon in New Plymouth, and Henriette suggested that we do the Pukeiti Puffer fun-run of about 6.5km, my immediate thoughts were “April fools joke! :)”. But when I saw that this was no tongue in cheek suggestion, I figured “how hard can it be?”. And besides, walking and/or crawling is always an option on such short runs. Maybe this is just what we needed to get us back on the road.

Daylight saving kicked in and with the event only starting at 11:15, we had ample time to sleep in, have breakfast and make our way to the venue. A good field of participants pitched for all three events, making parking a wee bit problematic. But we all got sorted and after we entered, the briefing was done before we were off.

Three different events were presented: a 2km for kids (which I briefly considered when the reality of the “run” finally sunk in), a 6-7km out-and-back run (which we did), and a 10-13km circle loop challenge, which sounded very exiting. If only we hadn’t been so lazy the past four months … As always, the period shortly before any event buzzes with excitement and adrenaline – always a very uplifting moment for me – hyped up and happy to be there, tinted with a little bit of “fear”, depending on the size of the challenge.

It was the perfect day for a trail-run in the park. Overcast and cool which turned into a fairly hot and humid run.

The runners doing the longer event were set off first, and 5 minutes later we were on our way. Starting in front of the lodge, you run across the vast lawn before turning onto the footpath where we reached a nice long downhill, helping us to settle into a slow trot. The “pecking” order was quickly established and we slotted in nicely behind the back runners, just ahead of the walkers.

As we ran the downhill bits (which turned out to be only the first shortish section), we realised that it will all be uphill on our way back! But we decided to just walk all the uphills – there is no way that I would be able to run even three metres uphill in my unfit state.

The trail turned out to be not too technical and really a very lovely run. The Pukeiti Gardens are beautiful and running amongst the trees and shrubs, only surfacing every now and then for a view of Mt Taranaki’s foothills, makes for a very pleasant scenic outing.

A hanging bridge at around the 1km mark is marshalled as only four people are allowed on the bridge at one time. That caused a small bottleneck on the way out, but coming back, runners had spread out enough so that this was not a problem anymore.

At about 2kms a watering station manned by friendly helpers provided some much needed H2O. With the humidity and heat, we lost quite a bit of fluid. The last bit of the road before the turn around point, were run (walked in our case) on tar. The biggest part of the first half turned out to be mainly uphill. So you can imagine the fun we had on the way back, as we came screaming down the mountain!

I guess it is thanks to the fun we had, but the course felt a bit shorter than the 6-7km it was supposed to be.

Really glad to have done this, we left for the late brunch and relaxing afternoon at the Roodt’s.