The little cannon that was used for the start. Don’t be fooled by its size!

Have your picture framed, courtesy of Malaghan, for the Run for Research members. 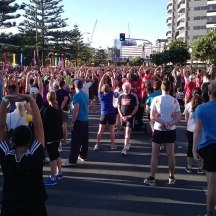 At the start – warming up shenanigans.

I decided to go red, orange and white for Malaghan.

Gerry, fresh and ready to go. 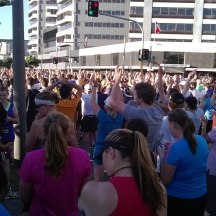 More entertainment to make up for the few minutes late start.

The Start banner – far, far away! 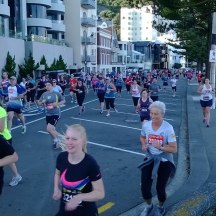 On Oriental Parade – the crowd starting to thin out a bit.

Cobham Drive where we encountered the first 10km returnies.

Gerry, clearly having a good day on the road.

Past the halfway point – me at full speed.

The out and back section is very sociable. 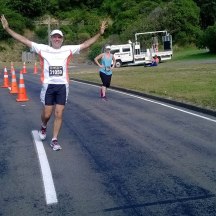 Gerry really having a blast at the turnaround point.

Fly, fly away – only about 7km to the finish.

Our walk through Mt Victoria Tunnel on the way back to the start, some 4km from the finish.

Comfort/reward food in the form of beer and pizza.

Let me say upfront that I am no good at asking people for money. As much as I would run around any Bay, around New Zealand or around the World for that matter to support a good cause, I just can’t get myself to ask people for money. I assign this to the fact that for the first 40 years of my life I lived in a country where the vast majority of the population are in need, and begging is just part of the make-up of daily life. You end up being overcome with guilt, because you simply cannot help everybody everyday who are constantly begging you on every corner and every turn you take for money, or food, or clothes, or anything else that might help them survive to see another day. And you become a bit allergic to asking for money yourself. I am sure fundraising for sponsorships come with much less baggage in a first world country where most everyone lives above the poverty line, so maybe in years to come we will get more comfortable at it.

So when Gerry entered us as ‘Run for Research’ sponsors to help raise money for The Malaghan Institute (New Zealand’s leading medical research institute focused on finding cures for cancer, asthma and allergy, arthritis, multiple sclerosis and infectious disease) I was a bit skeptical, but was hoping that by some or other miracle people would simply start donating money out of the blue. But in actual fact, you need to know people, a lot of people, the good hearted sort that wouldn’t mind parting with a couple of dollars in support of a good cause. Or else you need to know rich people who can instantly donate enough to help keep a few scientists busy long enough to come up with a cure.

Needless to say, our attempts to help raise money didn’t amount to much. Sorry Malaghan. It was not through lack of trying.

We drove through to Wellington the day before the race to collect our race packs and spent a lazy afternoon in the capital. A few spits of rain on the way down had me worried for a bit, but it cleared up and the morning of race day turned out to be just fine. Some wind around some of the bays, sometimes from the front and other times from the back, but nothing too serious.

Fourteen thousand people pitched for the event that started at Frank Kitts Park. All the roads were closed off, making for a most pleasant run out of the traffic in a very busy city. The 21.1km and a newly introduced 10km event had an earlier start – just after 8am, while the 6.5km event started about an hour and a half later. The street was lined with participants and after having spend some time in the queue to use the loo one last time, we ended up quite far down the road towards the back of the field. When the canon (yup, the cutest little actual canon!) was fired indicating the start of the race, it took us 4 minutes to reach the official start banner, and then still had to dodge thousands of slow walkers who started in the front. I always thought it was a courtesy ‘gentlemans agreement’ that you start according to your pace, but it turned out not to be the case. The first 10 or so rows where reserved for the really fast runners, but apart from that, you can stand right in front even if you’re just out on a Sunday stroll. It took about 2km of dodging and weaving past walkers before things got sort-off normal. The fact that this is a fun run probably explains why it’s not necessary to start according to your capability, but surely it must be equally frustrating to have runners come screaming past for the first 15 minutes if you’re just out on a Sunday walk?

From about 3km we got into a nice trot, still passing some people, but the road was more open and participants where more spread out by then which made passing a bit easier. The Round the Bays must rate as one of the flattest events on the calendar. Starting at Frank Kitts Park, you pass Te Papa museum and follow the coastline around Oriental Bay, Baleana Bay, Weka Bay, Kio Bay, Evans Bay, Shark Bay, Shelly Bay, Kau Bay, Mahanga Bay and Scorching Bay.

Just past the 6km mark you turn left onto Cobham Drive and from here it becomes an out and back course. The turnaround is at about the 13km mark. Your follow the same route back to finish at Kilbirnie Park, 6.5km from the start.

We were going well, felt strong and were going at just shy of a 6min/km pace when all of a sudden at the 15km mark, I got extremely dizzy and off-balance, having to grab on to Gerry not to fall over. We stopped dead in our tracks. Passing out didn’t feel far away, so I bent forward and tried not to faint, while getting increasingly nauseous. We stayed put for a while and then decided to walk for a bit. After a few hundred metres, I felt okey again and we took off on a trot. I was cold, covered in goosebumps and happy for my warm top at that point. Needless to say, the unknown of what was going on was very concerning, and not wanting to push my luck by trying to keep up my previous pace, we just jogged on to try and get to the finish. (I’m almost 100% certain it wasn’t under-hydration or blood-sugar problems, as I’ve learned to managed that fairy well over the past 13 years.)

The weather was near perfect. A light wind, at times a bit stronger, but otherwise nice and warm with a cool breeze. The last kilometre or so we ran straight into the wind, but by then I was just happy to hear the PA system and commotion that marked the finish. Music was playing and thousands of people where all over the park. We finished in 2:19 for the 21.7km course (turned out the turn-around was a bit further than it was supposed to be), hence 2:15 for the 21.1km, fetched our medals and joined the Malaghan tent for a sausage sizzle, juice and a chat.

From the finish at Kilbirnie Park, bus services were available to get back into town. The queue looked like it was a thousand people long!, so we decided to walk the approximately 4km back to the car. And therefore we also got to experience the Mt Victoria tunnel (623m) on foot – not something you get to do everyday if you’re not a Wellingtonian. Some trivia from Wikipedia: “There is a tradition among Wellingtonians of tooting (sounding) a vehicle’s horn as they pass through the tunnel, leading to the local colloquial name of “Toot Tunnel”. Some suggest that the tooting began as a tribute to Phyllis Simmons, who was buried alive in the spoil from the project by a tunnel labourer, George Coates. Coates was hanged at Mt Crawford prison in 1931.”

A great event and even greater that’s it’s all for a good cause. One we would definitely try to do again and hopefully be more successful in obtaining some sponsorship for next time around.