Hokitika is a gem of a town on the west coast of the South Island. How’s this for a super-quaint town sign? 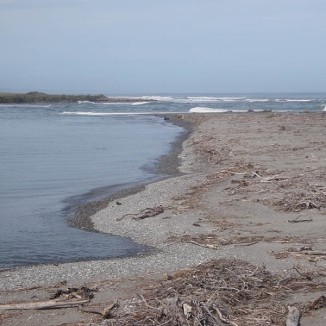 The “spit” – a sand bank stretching into the sea creating a natural bay at Hokitika. 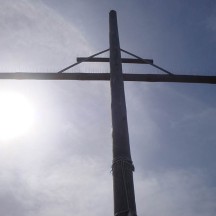 This cross near the spit has lots of hooks where different flags used to be attached, to inform incoming boats of the conditions at the entry of the bay.

We parked some distance from the actual start of the track and got a kilometre extra training on a jeep-track.

One of the very technical sections, with lots of roots, mud and uneven ground.

The sounds of boats and other “water toys” were humming in our ears for most of the first half. 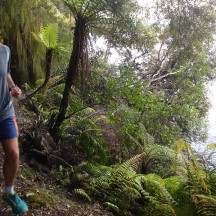 Lake Kaniere visible through the trees every so often. 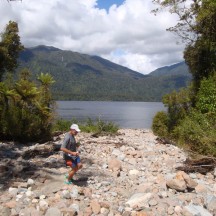 Some rocky sections, presumably side-streams running into the lake. 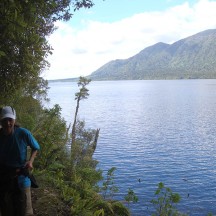 It was a really hot day and we did not take nearly enough water. I was hoping to get some at the other end of the track. Not to be, unfortunately, so we ended up pretty dehydrated.

A big climb at the end of the 11km before turning around and going back along the same path.

In the setting and frame of mind of The Luminaries (Gerry is finally making the time to read Eleanor Catton’s Man Booker Prize winning book), we arrived the evening before in Hokitika – historically a gold mining town. Driving up and down the city centre streets we tried to picture various scenes in the book, wondering which buildings (or remnants of buildings) might have featured in the story, which of the hotels might be the one where Moody walked into the closed meeting of the twelve men who’s collective experiences make up the novel. Standing at the “spit”, staring out at the ocean as the sun goes down, had us wondering if this was where some of the fictional characters in the book had also stood. This piece of land, the neighbouring harbour, and our subsequent drive up to Lake Kaniere, conjured up vivid visions of scenes from the book.

We saw the Lake Kaniere Track in a local brochure and decided it looked ideal for a trail run. What better way to experience a place than to do it by foot? New Zealand is literally a network of trails in every nook and cranny of the country. It is a trail runners paradise. Not only are you safe from muggings, but since there are no natural dangers like snakes, scorpions or spiders that can kill you, it really is the setting for an invigorating, stress-free run.

We drove the 15-odd kilometres next to the Kaniere River, through Kaniere (the shanty town housing the Chinese immigrants who worked the mines in Catton’s story) until we reached Lake Kaniere. It was buzzing with activity as skiers and tubes were towed behind boats, wet bikes charged up and down the lake and families were having a great time in the sun.

The trail tuned out to be rather technical. It follows the rectangular lake on the western side through indigenous forest. Apart from stones and rocks, the whole route is strewn with tree roots, making the risk of tripping and falling a constant part of our progress. The occasional muddy sections and millions of little streams to leap over, ensured we kept our attention focused on the path.

Although the course may seem flat, there’s small inclines of two or three metres all along the way. Nothing is really ever flat. It goes up and down little bits all the time for the first about eight to nine kms, until a rather nasty huge climb over the final two or three kilometres takes you to the car park at the other end.

We were hoping to find water at the other end, but unfortunately there was nothing and we had to make do with 650ml between the two of us for the 3.5 hours. Normally that should more or less be the amount of water required per person per hour! Needless to say we were quite dehydrated by the end of our run.

With about three kilometres to go, Gerry took a dive, not once,  but twice in the space of about 400 metres. The first time he tripped over a tree root and fell lengthwise down the path, and the second time he ran head first into an overhanging tree trunk! Luckily no serious injuries, other than maybe a bruised ego. What is it about the 20km+ point in a trail run?

Despite it being tougher than anticipated, we were quite happy with our long run on the third day of the new year. Although perhaps a bit too technical, we got a good workout using more muscles than usual.

Only about a month to go before Tarawera. The million dollar question is, what should our training regime look like for the next four weeks?