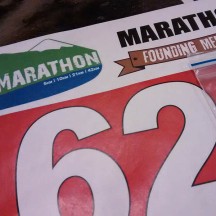 Founding Member! 🙂 Nice touch for everyone doing the inaugural. 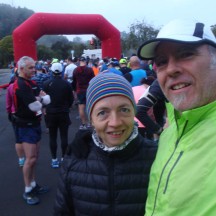 Off we go, next to the Waikato River at Huka Falls. 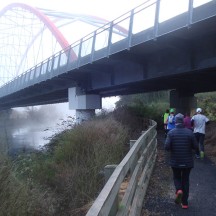 Passing underneath the SH1 bridge. We’ve driven over the bridge many times, never expecting to be running under it! 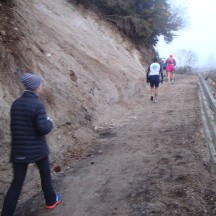 A few short hills, reducing some participants to a walk.

Some open patches in the otherwise misty landscape. 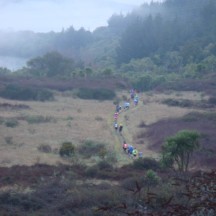 I love how they propped up distance markers! 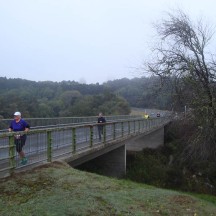 Crossing the mighty Waikato as we turn back towards town. 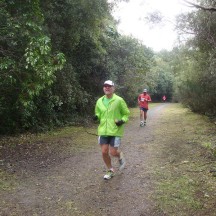 En route back to Huka Falls. Just after the 8km mark.

Despite the cool conditions, the hydration provided at the aid stations was most welcome.

A close encounter with a hydroelectric power station.

The warmth of the Wairakei Thermal streams looked very inviting on a cold morning. 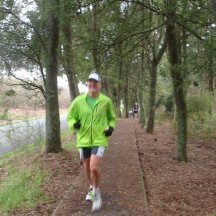 A footpath next to the road.

Gerry speeding down the hills.

Through a redwood forest as the sun made a quick showing, before disappearing again.

Marshalls making sure we crossed the roads safely.

Some minor chaos when we, together with hundreds of 10km walkers, hit the returning marathon, half marathon and 10km runners and walkers. 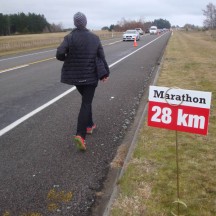 Two thirds down! This is the point where you really start wondering why you keep doing this to yourself. 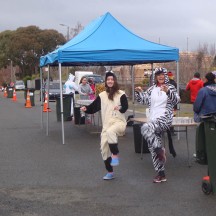 Some entertainment provided by the can-can onesies near the 30k mark.

The long and winding road. A sealed walkway leading us all the way back to the finish.

The bagpipe player is a feature we remembered from our previous running of the Taupo Half Marathon.

Delicious buns and chicken soup at the finish – a lovely touch.

If I didn’t know better, I would have sworn Totalsport created this new event as a sneaky way to lure people into trail running. 🙂

The Hoka One One Taupo Marathon is new on the calendar for 2015. Totalsport took over the reigns in 2014 for all events – a 5, 10 and 21km, adding the new 42km to their offering this year for both runners and walkers. And what a great addition, I must add!

The first half is a non-technical trail run while the second half is on-road. The second half is the same route as the original half marathon, with a couple of minor changes (like the short stretch shortly after the second turn-around point, that is now also paved. Previously it was an off-road dash back to the lake walkway).

To say that I was not nearly ready for this marathon, is an understatement. Add to that the fact that what I thought to be a bad case of hayfever, turned out to be a cold. We took my heart rate in the morning (just shy of 60bpm as per usual) and figured I must be okey to run.

The temperature was around 6 degrees (felt like 4 according to MetService) so with a beanie, buff, longs, and four top layers, we caught the courtesy bus to the start of the marathon at Huka Falls. A few showers were predicted, but a waterproof layer on a run is always such a tricky one. You end up being wetter from the sweat caused by the so-called “breathable” rain proof layer, than you would be from being in the rain. I am yet to find the breathable rain-proof garment that doesn’t make you sweat and overheat within the first couple of kilometres.

A drop-bag option allowed us to leave one layer behind to be taken to the finish. This is a useful addition to any event. We started promptly at 7:30. With around 300 participants in the marathon (approx 2700 in total across all events) we were set off in a staggered manner, helping to ease congestion on the narrow path. The generous cut-off of 9 hours, had a few walkers and newbies also participating. With my unfit state, four days of no running due to work commitments, and health issues, I was pleased with the long cut-off. One could potentially walk the whole course and still make it in time. My strategy was to jog the first 30kms and then walk from there if need be. To treat the event as a LSD (long-slow-distance) run, not getting myself out of breath or my heart palpitating out of control.

This marathon-of-two-halves, for us, turned out a great idea. We love both trail running and road running. Most trail runners hate road running and lots of purist road runners wouldn’t dare step onto the trails. And since the trail section of the first half is not technical, road shoes were the perfect match for this event. A bit of mud and a couple of slippery areas were the only justification for trail shoes. That said, if you’re happy to pound the pavements with trail shoes over the second half of this event, each to his own.

The first half was beautiful and most enjoyable. Kilometres ticked over unnoticed despite a drizzle, misty spots and tenacious cold. Undulating and very scenic, we walked most of the inclines and jogged the rest. Cautious about my sore throat and snottiness, we ambled along appreciating the scenery.

Starting off in a northern direction away from town, we reached the first turn-around point at about 7kms when we crossed the mighty Waikato River and the Aratiatia Dam, heading back towards town, passing the Huka Falls on the way. The first half took us about 2:32, and according to Gerry’s GPS was about 700 metres short. But as we know, GPS watches in cloudy conditions on curvy forest paths are notorious for being inaccurate.

We continued on through the town, linking up with the lake walkway veering in a southern direction, where we started encountering hordes of participants in the other distances, going both ways. Between the 24 and 25km mark, a few near collisions, pushing and shoving on the narrow path with runners and walkers going in both directions, turned this stretch into a disaster zone. Especially on very sore wobbly legs after 23km on the (off!) road already. Luckily soon after, we made a detour back onto the main road out of town, where although still lots of participants in both directions, there was at least enough room for everybody to do their thing.

We reached the second turn-around point at about the 30km mark. I was rather buggered by then, as one tends to be at that point in the marathon, with a sore throat and sucking on Strepsils (that was a first for me!), but just kept shuffling forward. The course followed the walkway next to the lake, all the way back to the finish and race headquarters at the Great Lakes Event Centre. Not only did we receive a medal and famous Taupo brown trout (marshmallow fish), but also a free beer courtesy of Speights, and tasty soup and a roll! Have to admit that after spending five hours in the cold, being wet from a drizzle, the soup was a highlight! May they never stop doing this even should the event grow to double its size!

Despite my personal issues this was a great event. Very well organised, and the mix of trail and road was an interesting choice from the organisers. They might only attract a certain type of runner, but I can see this growing into a size bound for disaster on the trails in the first few kilometres.

I hope we can be back for this event next year! Although it might clash with the Manawatu Striders’ inaugural marathon next year… Choices, choices. Only time will tell.