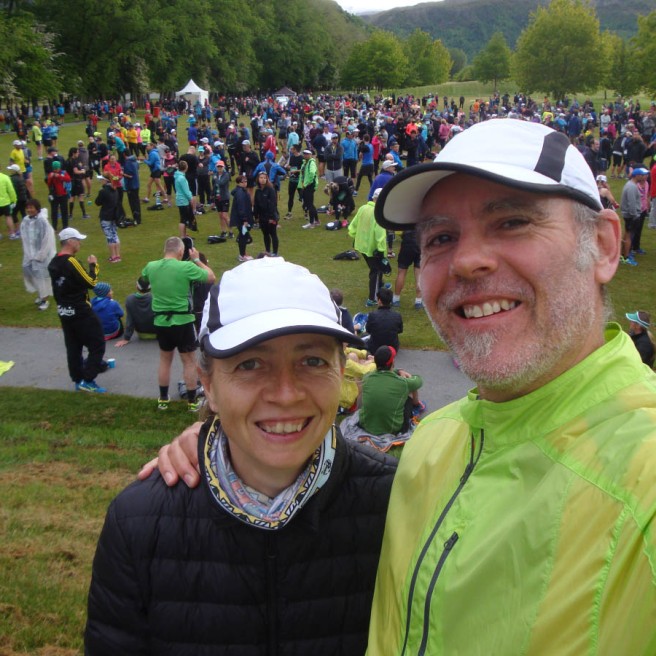 At the start at Millbrook Resort.

Self-seeded wave starts helped spread out the trail of runners to ease congestion on the walking tracks. We had no problem whatsoever, not sure what was going on in the front. 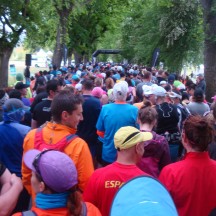 And we’re off. Long road ahead.

The downhill into Arrowtown which was the start of my ITB problems. 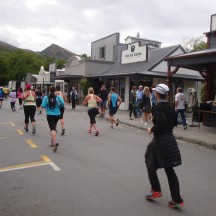 Gerry making his way through the suburbs.

Running next to Arrow River. 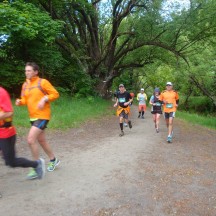 Enough runners not to be alone, and not so many to congest the walkways.

Lovely scenery and a perfect day for it!

Flying round the corner on a downhill. Yeah right.

One of many bridges across streams and rivers. 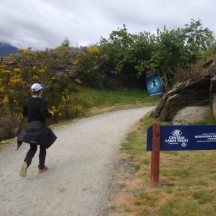 Queenstown Trails Trust was getting $10 from each entry towards the maintenance of the river/lake walkways.

A mainly flat course with just a few undulations and a hill or two thrown in for good measure. 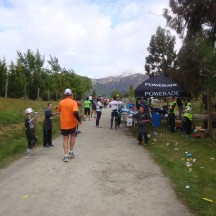 Water point with lots of little helpers. All stocked with water and Powerade. Most of them also offered Sport Beans.

One of the short sections on a sealed road, running along the Arrowtown Lake Hayes Road towards the lake. 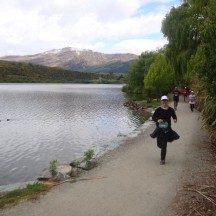 Have to fool myself to look strong, although I was far from it.

The sound of a band drifting across the water, made for a very enjoyable run.

Beautiful paths to keep your mind off the pain.

So very far to go still …

Not too far from the end of the 7km circle around Lake Hayes. 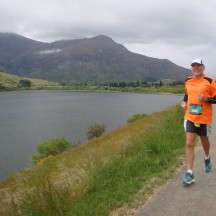 Gerry still going strong and having a ball.

Colourful dots all along the walkway. 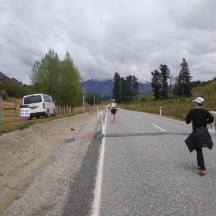 After what felt like an eternity, we finally reached the halfway mark. Took us 2:37. 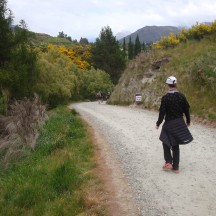 A steep downhill which I had to walk on account of my terribly sore ITB’s.

Lush new growth on the trees.

At 26.5km we reach the waterpoint before crossing the Shotover River.

Gerry on the Shotover River bridge.

High fives all round!

Around this area we passed some waterworks which wasn’t all that pretty. But the lupins cheered me up. 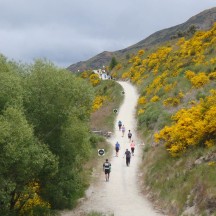 Just a few little hills to keep things interesting. This one dubbed “Marathon Hill” which is quite tough at around the 32km mark.

Lots of inspirational posters en route with this one near the top of the hill. 🙂 Next to the Kawarau River.

Some more musicians. I love events that have local bands to entertain runners and crowds.

The Frankton Arm of Lake Wakatipu in the back. 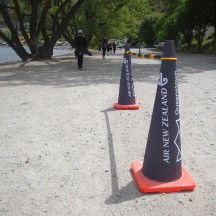 The organisers made the most of the main sponsor, Air New Zealand.

Gerry still doing well next to the Frankton Arm.

Turns out it wasn’t only my legs that didn’t work so well anymore – it was also my trigger finger! Luckily the photographer got his Charlie Chaplan jump at the right time. 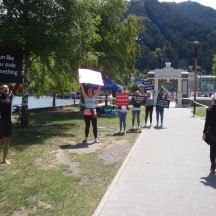 With only about 1km to go, these guys were really going all out cheering runners on.

Through the streets of Queenstown with lots of support along the closed roads. This must have been fantastic for the guys who were still part of the event. Being so far behind, we definitely missed out of some highlights the event had to offer.

With his landing gear out, Gerry is on the runway taxiing his way to the finish.

Very happy to have made it to the finish with near nothing training in the two months leading up to the event.

Chilling in the finish zone with bananas, water, Powerade and a happy grin. 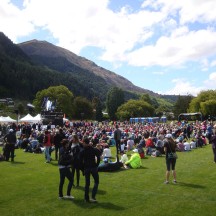 Prize-giving. Our luck has definitely run out this year. 🙂

The Air New Zealand Queenstown International Marathon saw its second running in 2015. It boasted a huge field of 9000 participants across all three events (42.2, 21.1 & 10km, plus a kids 2km). At $149 entry fee it is not the cheapest marathon in the country ($10 goes towards the Queenstown’s Trails Trust). Add to that the $15 bus fare, and, if you want, the official event cotton T-shirt at $40, and you’re already looking at $200+. Other event branded merchandise like technical tops, peaks, caps etc were also on offer. The expo consisted mainly of sports-related brands advertising and selling their goods.

The event was organised by Lagardere Unlimited Oceania and I have to say, things ran extremely smoothly. It was very well organised, making the most of the main sponsor, Air New Zealand, with a fantastic finish through the town, even for us slow back-of-the-packers. It cannot be faulted and I’m seriously considering the Motatapu Ultra or marathon, as well as the Napier International Marathon, just because it’s presented by the same organisers.

To say that I wasn’t ready for this marathon is the understatement of the year. Having undergone minor surgery under sedation, followed by a course of strong antibiotics at the end of June, gave the old system a knock that would proof problematic, even months later. Any and every germ that came past just set up camp in my system and would not back off for weeks on end. Hence, four months later I’ve gone from no illnesses in five years to two colds, followed by a bout of bronchitis, more antibiotics and yet another cold, just for good measure.

The end result? Little to no training for the four months leading up to this event. Initially I still tried to “run through it”, which probably didn’t help my cause, but truth be told, I doubt it made much of a difference. Having said that, when you have to take throat lozenges during a run to ease a sore throat, it is probably not such a good idea to run. In my defence, I only kept running so long as it was a head cold. The moment things went south, I stopped altogether. So for the past two months, we’ve managed a mere 166 kms in total, of which only one 8km run happened in the month of November. The only real kms I’ve gained were the ones around my bum.

Having already entered months in advance, we were not going to just forfeit the entry fees. On top of that, travelling and accommodation were also booked already and it would have cost us around $1000 if we cancelled the whole trip. That’s the trouble with doing out of town or overseas events. And the South Island is, for all intents and purposes, “overseas”.

Our accommodation was pretty scruffy but cheap by Queenstown standards and we were only 500 metres from the start (or bus pickup) and finish of the race which was good. So no worries about parking with a huge field of 9000 participants.

The marathon started at 8:45 and buses started commuting from 7:00am to get all 2000 marathoners to the start in time. We were on an early bus and arrived at the Millbrook Resort in time to relax, eat an apple, get bored, eat a banana, have a couple of portaloo stops and just drink in the beauty of the area, and with stunning weather to boot, we could not have asked for a better morning out.

With a staggered start, we had no problems by the time we reached the narrow paths which wasn’t until the 2.7km mark, by which time the field was spread out considerably. Not sure what it was like if you ran with the masses, but we had an absolute ball.

From Millbrook, we ran through Arrowtown’s main street and on towards Lake Hayes. Making our way around Lake Hayes, we followed the trail towards Frankton and onwards to Queenstown. Seventy percent of the course were on trails or hard packed dirt roads, and the rest on sealed roads, making it accessible for walker participants as well (although, for some reason, the organisers don’t officially have a walking category for the marathon). Water points were every three to four kilometres, stocked with water, Powerade and Sport Beans. Since we were in a field of 2000 runners we always had other runners around right to the end. Nothing of this running by your lonesome self as we’ve often experienced at races. Some wee little ups and downs were breaking up the monotony of the otherwise fairly flat course. With the exception of the hill at 30km, dubbed Marathon Hill – a significant hurdle to negotiate at that point in the race.

From the start Gerry and I were trotting along nicely when at about 2km we reached the first downhill. And halfway down the hill my left ITB started acting up already. Trying all sorts of tricks to make that leg work a little less, I stuffed up the right ITB at about 5km. And that was it. For the remainder of the course I was battling the right ITB even more than the original left leg problem. When I ran it was very sore, and the moment I started walking, it was better. But from 30km onwards everything was sore anyway, so I walked most of the way to the finish with just the odd little trot to fool myself into thinking I was “running”.

At the 6km mark (36 to go as the markers were counting down) Gerry was saying “En, so eet ons hom – happie vir happie, nom nom nom” (And, so we eat him – bite by bite, nom nom nom), which was hilariously funny at the time, as it rhymes in Afrikaans and plays on the “how do you eat an elephant” anecdote. Must have been a nervous breakdown in the small as it doesn’t seem all that funny now.

Would be nice to go with friends and share accommodation, as you get better deals that way. But crappy accommodation or not, I would love to go back when I’m in better shape.

A fantastic event. A must do, even if you only do it once.