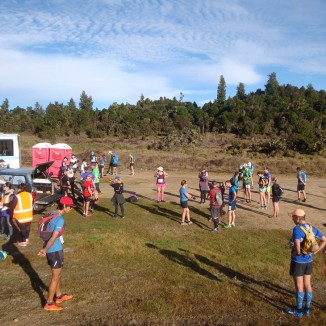 Waiting for the race to start, with our usual mix of excitement and panic.

Some nasty little hills on the 2km loop through the paddocks at the start helped to quickly spread out competitors.

Meet Chris, in red behind me. We managed to stay within shouting distance from each other for the entire race. 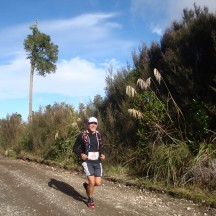 Enjoying the early morning sun as we ran along the logging track.

Happiness is running through the trails on a crisp autumn day. 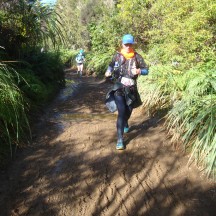 Slippery conditions early on when we could still spot some other participants.

Nothing like crossing a mountain stream to keep your feet fresh and frosty!

The downhills were great for making up time, but hammered our quads.

Some downhills definitely felt safer on foot than we would have felt on MTB’s.

Taking a cautious approach on one of the wider crossings.

What goes down usually goes up again, so after some major downhills it was back to slogging up some never-ending hills. 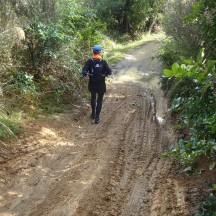 The rain of the preceding few days made for some very slippery downhills. 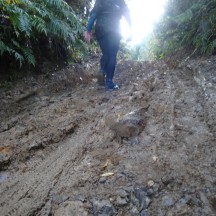 Despite all the mud, the stream crossings helped keep our shoes uncharacteristically clean.

It required concentration and fancy footwork to keep upright on some of the more slippery downs.

The aid stations were quite far apart, so after miles of non-stop climbing this was a very welcome sight. 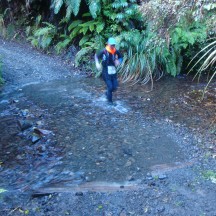 Speeding through the stream to limit the time spent in the chilly water. 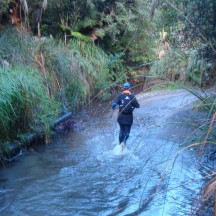 …in this case, another icy stream. 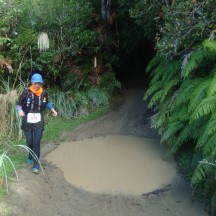 Some puddles could be avoided, even though I’m sure the speedy front-runners charged straight through. 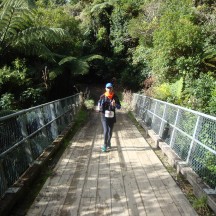 Many parts of the route looked completely unfamiliar, including this bridge.

One of the official vehicles, transporting the bicycles of some unfortunate MTB participants. 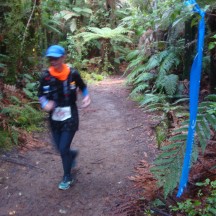 Signage (including the familiar blue TotalSports ribbons) was excellent, and we never felt we might be on the wrong route. 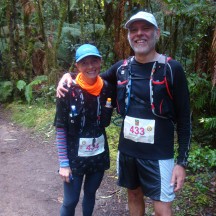 Taking a photo-break about 3km from the finish. Thanks for offering to take the photo, Chris!

Our second event in the challenge turned out much better than I expected – great weather, good physical condition, and manageable terrain. After a not-so-nice experience at Rotorua, I feared that things can only get worse. I was still tired from the Rotorua marathon, and on top of everything I’ve picked up a couple of niggles.

Gerry and I drove through to National Park on Friday morning after a dentist appointment and some last minute shopping for compulsory gear (gauze pads and strapping – things I’ve never in my life use before). We booked to stay at the backpackers and after we checked in, we strolled over to race headquarters just a few hundred metres up the road to register and have our gear checked. Running into Graeme, Deb, Pat and Norman we decided to share a drink (beer in our case) before everyone scooted off to go about their pre-race business.

It was only early evening, so Gerry and I decided to make a stop at the Speights Ale House for another beer and fries. Afterwards, we also stuffed ourselves with home-cooked fried rice, with onion, green pepper, corn, and chillies. Rob only arrived later in the evening and came over to say hello and have a coffee with us.

I might have mentioned this before, but NZ is having an unseasonably warm autumn. Our room was quite hot during the night and so was the whole weekend.

We woke up early, had breakfast and then met up with Rob and Graeme at Owhango to leave two cars behind and drive one to the race HQ from where we got bused to the start in National Park. Gerry still had a job in Palmy after the run, and we had to dash back as soon as we finished the event, so Graeme and Rob kindly offered to help out with car arrangments so that we could have our car ready and waiting at the finish.

The day turned out fantastic: no wind, blue skies and warm temperatures that might (like last week) have been too hot for some runners. As you run the bulk of the course in the shade, I was quite happy to have long pants and sleeves.

We started a bit late (at about 9:30 instead of the scheduled 9:15) to allow most of the MTBers to pass (and maybe to allow 70 odd participants to make a final stop at the only two portaloos). The first 2km is a loop through paddocks to make up the marathon distance, with a couple of good climbs. When we passed the start again, we were directed onto the logging road that is the T42. I remembered it to be a fairly wide road so was quite surprised when a big part of the road was only quad-bike wide. We ran into a few (presumably) hunters on the course with quad-bikes, who in one case blocked almost the whole road. The narrow road made me wonder if we weren’t on a different route this time. Nothing looked familiar which almost made this a new experience for me.

I felt great (compared to last week) and we managed to make up good time in the first 17km. But some relentless hills between 17 and 30km (with roughly only 3km downhill in that stretch) reduced me to a lot of walking, which quickly changed our potential 5-hour finish to a 5:27. Truth be told, 5 hours were probably never realistic for me to achieve this year on this course. Or maybe any other year! From 30-37km the gradient is mostly downhill and the last 5km undulating with a gradual climb and a terrible long uphill a couple of kilometres from the finish.

As a result of all the rain of the two days prior, the course had quite a lot of puddles and muddy bits. Some really steep descents must have been very scary on a bike. Rumour has it that a few broken shoulders and collar bones saw some riders finishing their race sooner than they might have hoped?

I’m always surprised at how far 42.2km actually is. When fatigue and soreness set in, it is really tough to keep going. At some point, you make peace with the pain and just keep on putting one foot in front of the other. And usually, something magical always happens in the last 7km: it feels as if the end is a thousand miles away and that you will never make it to the finish. By that time I normally feel closer to my end, than the end of the race. But before you know it, those last kilometres have ticked over unnoticed and suddenly the end is in sight. Maybe the pain cause my brain to go into shut-down mode? And as soon as you reach the finish line, with a medal around your neck, the whole distance doesn’t seem so hard anymore and you’re ready to sign up for the next one. Ready for more agony. More pain. More cursing yourself for doing this to yourself. Aren’t we a strange bunch.

We were so happy to have made up time (I expected to take anything from 30-60 minutes longer than we did), that we decided to have a quick beer before hitting the road.

With 32 minutes all up over our target 5 hours time limit for each marathon (or rather the slightly altered target of 5 hours average) we need to complete the remaining three marathons in less than 4:49 each. Doable? Maybe. I am certainly going to try. Most of my niggles were really minor or altogether absent during this event. Maybe it’s because trails are more gentle on the body? Having said that, it’s now three days after the event and I still battle to go up or down stairs. My quads and shins are completely buggered and I have a serious bout of DOMS (delayed onset muscle soreness). Here’s hoping they will soon be better so that we can go out for a run. 🙂

Already looking forward to see how we manage the next event.