*Thanks for the title Graeme! 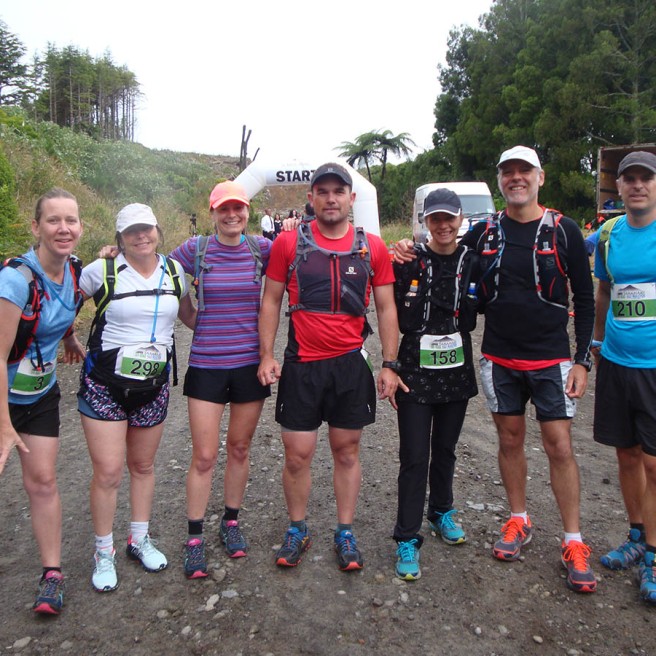 At the event base.

Nervously happy to be out there.

With 540 participants all starting together, you better get yourself to the front if you hope to pose a good time. Luckily not something we had to worry about!

A gradual incline shortly after the start, helping to spread out the field before the first single-track section. 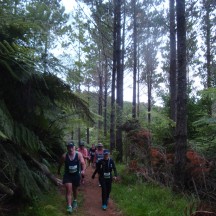 Any uphill was a good excuse for a walk-break. 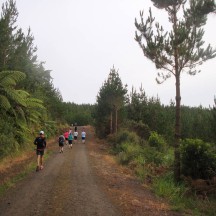 Alternating sections of gravel road and single track meant that we didn’t have any problems with bottle-necks.

Jogging through a lush green section.

Had to do a few takes to get this pic with Mt Taranaki in the background. 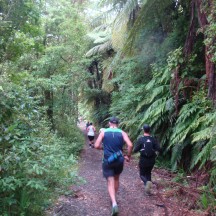 Back into the forest. 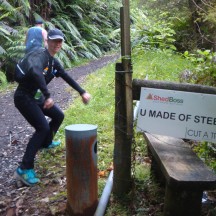 Not sure why I thought that acting like a baboon would prove my steel.

So glad it wasn’t raining or wet going up and down these bare soil stretches. 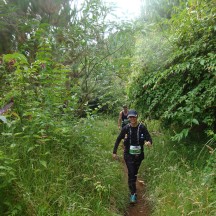 Enjoying a beautiful morning out on the trails.

Heading back out into an open patch.

…followed by an uphill slog.

No getting lost with course markings in abundance.

Luckily we could side-step all the muddy patches. 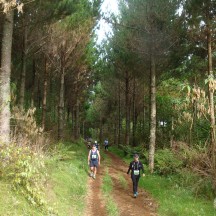 A mix of sun and shade meant it was never too hot or too cold. 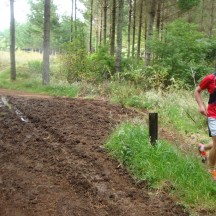 I guess the more competitive runners probably went straight through.

A very scenic stretch, with Lake Mangamahoe in the foreground and Mt Taranaki in the distance.

Running along the banks of Lake Mangamahoe.

Gerry on the first of the two swing bridges. 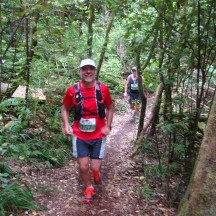 The second swing bridge on the half marathon course. 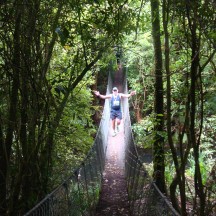 Graeme having a blast on the swing bridge.

Some tree roots to negotiate.

A short stretch run in both directions. But this lot had done a few kilometres in-between and were well ahead of us. 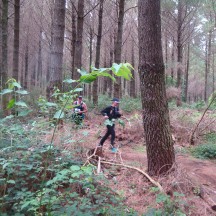 A very curvy section where you really feel like you are going in circles.

A long incline after passing the event base the second time. 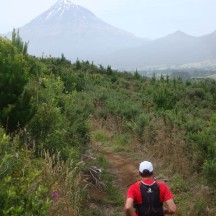 Gerry making his way through the young pine forest with Mt Taranaki up ahead.

Up and up we went. Just as well, as I had to walk lots anyway. 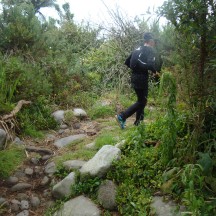 The Rocky Road stretch. Apart from roots, the only other semi-technical terrain.

Lots of steps, giving our heart and lungs a good workout. 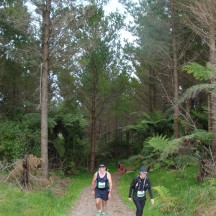 These smiles must have been thanks to the fact that the end was just around the corner. 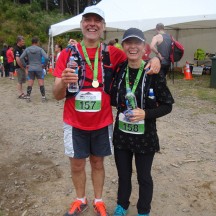 Very happy to have made it. And getting some medals to boot.

On all accounts, I should not have done this event. Apart from doing two half marathons, one in September and one in October, we haven’t been running for about five months, except for maybe the odd 3 or 4km slow trot-walk-run once every few weeks which is not even worth mentioning. And if there’s one thing I know, it’s that you don’t go running races unprepared. Mind you, I’ve never “run a race”. Rather, I participate in events – there’s a huge difference.

Being diagnosed with something like FAI, and then told by the specialist to consider a different sport, really does your head in. I’ve been agonising over the prospect of not being able to run anymore for the rest of my life, until my head hurts. Should I ignore what had happened and keep running, or should I not? Should we start saving to have the $20k operation done, or shouldn’t we? What to do? What to do? I felt like a headless chicken going in circles. And finally I turned to Dr Google in search of alternatives and there seems to be hope! But more on that later.

So despite our lack of training and my confused state about my hip-health, we decided on a whim to enter for the inaugural Good Home Taranaki Off-road Half Marathon. We’re self-confessed inaugural junkies, and I reasoned that I managed to tramp with a heavy backpack covering 20km on the last day of our five-day trek over Christmas, and hence should be able to cover 21km carrying far less and wearing more comfortable shoes, right? And if I am halfway sensible about it and don’t try to break any records, it should be doable, albeit very slowly.

Making a weekend of it, we could also catch up with friends in New Plymouth. They took good care of us with nutritious food, lodging and drinks to boot, and as parking was limited at the start/finish, they also offered us a ride to and from the event. It was great to have Henriette and Des join in on the 5km run. Good training for their upcoming adventure race.

Graeme, who also decided to enter last minute, joined us on the half and as always, it was great to have his company. It was nice to also meet up with a few of the Manawatu Trail Runners FB group before and after. And my goodness, how was that cheer at the finish! Thanks, Amanda! It certainly made all aches and pains fade into lots of laughter and smiles. And well done on placing seventh in the women’s category!

Overall, my hip behaved well. Maybe it was just because there were other body parts that were more sore.

The event itself could not be faulted. Take The DUAL (in terms of passing right by the finish [twice in this case] before actually finishing), the T42 (with regard to the forest/MTB tracks, open spaces as well as bushy areas, steep downhills), the Tauhara (gravel road, single track, forest), compress them into a half marathon, and you have the Taranaki Off-road event. The terrain is versatile, but not really technical (apart from some tree roots, stones/rocks and a few steps which can become a hazard on tired, undertrained legs). For the most part, it is easy underfoot as the course utilises “forestry tracks, walking tracks, bridle tracks, mountain bike tracks, and gravel roads“, as described on the event web page. And thankfully no running around in paddocks! Some very steep inclines and descents, which might have been a totally different kettle of fish in wet conditions.

Which brings me to the weather. We were outrageously lucky to have the most perfect day, sandwiched between some horrid windy and rainy days. Had it rained like the day after the event (11mm between 8-12pm), we might have bum-mud-slid up and down some of the gradients, making it all infinitely more challenging.

Running near and around Lake Mangamahoe, the Waiwakaiho River, through pine forests, indigenous forest, redwood forest, up and down hills on MTB tracks, made for a very scenic run.  Each time we got to a clearing, we had lovely views of Mt Taranaki. And as Graeme pointed out, if you can’t see the mountain, it’s raining, and if you can see it, it’s going to rain. Which proved true the very next day. Although it was hazy, we could also see the well-known three little peaks on the New Plymouth port, as we were zigzagging our way up a newly planted pine forest hill. I couldn’t help but think that this particular stretch will be a totally different run in 10 years time when the trees are all tall and obscuring the views.

The information that was made available before the event was sometimes a bit hidden/obscure. We couldn’t easily find any info on water points, and when we did, it said there weren’t going to be any and all participants had to be self-sufficient. But it turned out they did have one at 10.5km (stocked with water, electrolytes and jelly sweets) when passing through the finish line the first time. They also did not want to reveal the course route until the very last minute, to prevent runners from doing recce/training runs on the MTB tracks.

But otherwise the organisation was very good. Matt and his team at Cut a Trail Events did a fantastic job. They staged a really cool event, including medals for all finishers of the half marathon course. No wonder 540 participants pitched at the inaugural. If we weren’t so unfit (and injured), we might have been more “in the game”, experiencing a different side of things. Maybe passing someone or being passed was more challenging in the midst of the pack, but we certainly did not have any issues. Being first and foremost MTB tracks, might explain why there were often double lanes, making passing a joy.

When you look at the course map, it doesn’t look very enticing – you spend the whole event running back and forth in a fairly small area without really getting anywhere. But luckily, running in circles is right up my alley and apart from one very curvy stretch where you could see the other runners going in the opposite direction only a few metres away, things were varied and bushy enough that you hardly saw anybody else. You do get déjà vu when seeing the same marshals every few kilometres and realise you have passed this point before. And I will admit that was it not for the excellent course markings, I would still be going in circles in that forest. As Graeme aptly pointed out – we ran a doodle on Strava.

A must-do for 2018 if you were considering it but could not participate for whatever reason this time around.