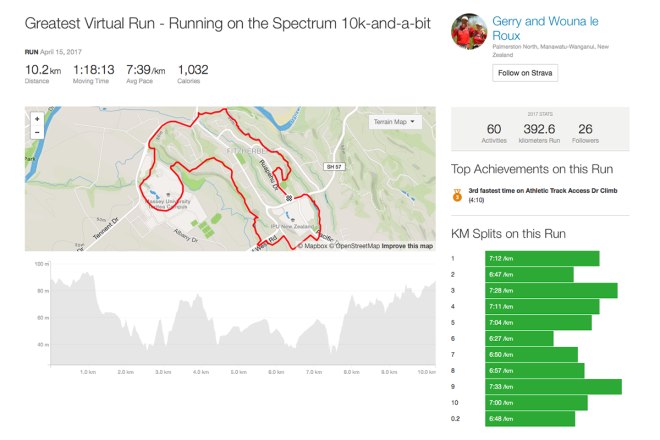 Funny how things just pass you by when you’re not vigilant and half organised. Is it a sign of our already very hectic lives that the thought of trying to fit anything else in, is just too overwhelming? Or are we just plain too damn lazy?

When Jason, founder of Running on the Spectrum, first mentioned his The Greatest Virtual Run, we were very keen and decided there and then to participate. And why wouldn’t you? It’s for a great cause, running should be part of your daily routine anyway, and you get a bib and medal to boot, all for only $20 ($28 for non-NZ runners). It’s no brainer, really. But we didn’t enter right away, for some or other reason, and ended up very nearly letting it pass by. I will never forget a friend’s comment on a hike somewhere in the sticks some 20 years ago: as we were queueing for the very basic outdoors shower at the end of the hike, a few people in front of us started talking. The shower opened up, but they just kept on talking. As he was pressed for time, the said friend gave it a few minutes and decided to go ahead of them, thus jumping the queue. While I was speechless, trying to close my gaping mouth, he was in and out of the slower in a flash (the talkers probably still don’t know someone went ahead of them), and all he said on coming out was, “you snooze, you lose”.

This event was very nearly a “you snooze, you lose” moment for us. Luckily we came to our senses in time to quickly register before heading out for a 10km trot on Saturday. Apart from a distance choice of 3km, 10km, 21.1km, 42.2km, or 150 km (run or walk), ideally to be done on 15, 16 or 17 April (to coincide with the Boston Marathon), you could also accumulate the 150km over the entire month of April to qualify as a finisher. April is  Autism Spectrum Disorder (ASD) awareness month, which covers autism and Asperger’s, as explained in a Taranaki Daily News article. If my mind wasn’t so preoccupied with studies and deadlines, I might have opted to do the 150km over the month of April. Maybe that would have gotten me back on the road again since none of the recent half marathons could manage to do just that.

For our 10km run, we did the “road much traveled”. The trails around Summerhill and Massey are our go-to these days for most runs. Since I’m well aware of my troubled hips, we try to run off-road as much as possible. And during our built-up for Tarawera 2015 and 2016, we covered this little 8.7km trail more times than I care to remember. This time, though, we added the Massey ring road to make up the distance for the 10km virtual run.

The weather turned out good, overcast and just a few spits of rain halfway through, not much wind and a comfortable run overall. We are really lucky to have these trails in our backyard. Not too hilly and totally runnable. Apart from about 1.5km on-road, the rest are all on lovely paths and trails through the suburbs.

If this event happens again, we might just sign up for the 150km. Should make it a 100 miler and give belt buckles, Jason! 😉

Photo courtesy of Jason Reid. Looking forward to receiving them in the post soon.

One thought on “The Greatest Virtual Run”