Another beautiful morning for a run.

The bride and best men, posing for a pic. 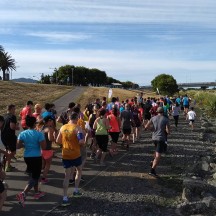 Lots of participants for this event. 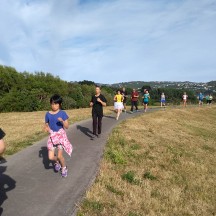 Running along the Hutt River walkway.

Some of the best men already on their way back. 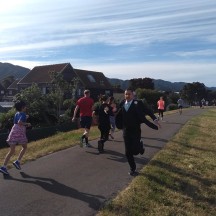 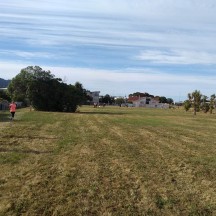 The bride not dilly-dallying either! 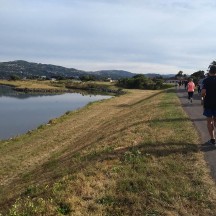 A nice spot for a parkrun.

Heading back towards the end of what felt like a very long 5kms. 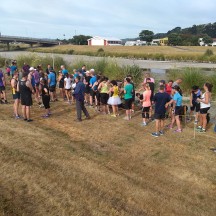 The line at the finish for the bar codes to be scanned.

Meeting up with friends who were visiting New Zealand for a few weeks, we happened to be in the Hutt Valley during the weekend and decided to fit in a quick run.

Too much eating out, way too much wine (and beer, and whiskey) and not a whole lot of running since the Twelve days of Christmas challenge, is a bad combination for attempting a “comeback”, so to speak. Full of pickled confidence she said, “let’s run to the event and back”. Including the parkrun, that would give us a solid 27km long-run. Great idea. Perfect idea! But…

When the alarm went off before 6am, I felt like the walking dead. When I finally dragged my lame body out of bed, we made it to the parkrun in time only to fit in a 2km “warmup”. Not exactly making true to my ambitious goal, but at least we managed a 7km run. It wasn’t pretty and I felt like shit all the way, but it’s done. Ultreia! On with the corpse.

This is by far the biggest parkrun we’ve done in NZ. At 266 (268 if you include us who forgot our barcodes), the narrow walkway can get a bit congested. Especially since it is also open to the general public taking their dogs for a walk, or a stroll to the local Saturday market close by. To make things easier, the organisers started all slower runners, people with baby-joggers and dogs, off on the stop-bank, where they merge with the rest of the field a few hundred metres futher up the road.

Ran on the Hutt Valley walkway, runners go downstream for 2.5km before turning around and running back. One of the nicest features of this specific event, was the happy newlywed couple who did the parkrun on the first morning of being Mr&Mrs (Megan and Geoff Ferry ), in their wedding outfits! And Mr Ferry and his best men are no average runners either, all finishing in the top (I’m guessing) ten of the field? Some of the best men smoked the course and one took the win in a time of 15:43. Mr Ferry managed a 18:01.

We are so far off schedule in terms of our training, but I’m glad nonetheless that we managed to get out the door, albeit for only 7km.