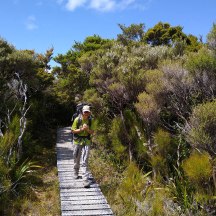 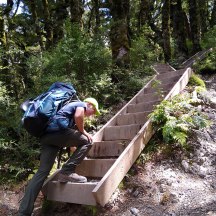 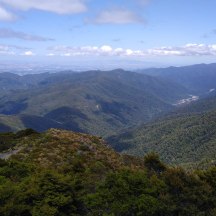 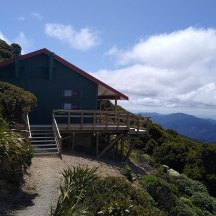 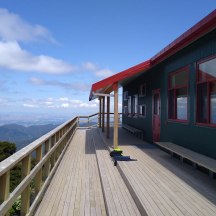 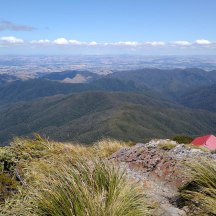 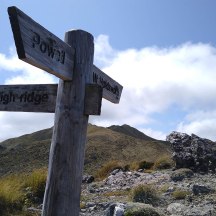 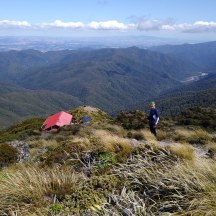 The month of January is not even finished yet and I already felt like I needed a holiday. Luckily we had the prospect of the two days back in the Tararua Range. Since our tramp over New Year I’ve been keen to get back in the mountain, but on “easier” and more “human friendly” terrain.

We ran the Jumbo-Holdsworth Trail Race in 2018 and thought it would be good to come back and experience things from the other side. At the time we ran it I thought the volunteer at the top of Mt Holdsworth (1470m) had the best spot and when we put our hands up to volunteer there this year, race director Andrew confirmed that it was available. Staying in Powell Hut the night before the race meant we could turn it into a little mini holiday.

As with a multi-day tramp, you have to be well prepared and pack for all eventualities. Apart from less food, all the normal paraphernalia have to go in the pack. Being only one night and two days, so one will definitely not die of hunger, and therefore staying warm and dry gets priority.

The track was quite busy and we had a good few chats with other walkers. There were quite a lot of people doing out-and-back walks and runs to the hut, or the trig, or over to Jumbo and down that side, or the other way around. We also encountered a few families with kids on the route making their way to the hut.

The first section of the walk follows the Gentle Annie track which is a gradual uphill to Rocky Lookout from where (on a clear day) you can see the hut (actually, apparently both huts – Powell and Jumbo). Totara Flats is about 3km from the carpark. After Totara Flat, Pig Flat is a boardwalk leading to the Mountain House Shelter. On route there are turn-offs to Atiwhakatu Hut and Totara Flats Hut. The final push to Powell Hut is a rather steep uphill, but has stairs and is therefore easy with none of that technical clambering business.

All up we were (initially) 20 people in the new (about six months old, officially opened on 12 July 2019) 32 bunk Powell Hut (1200m). And what a mansion it is. At a quick glance it seems to be roughly three and a half times the size of our wee house (I have to confess that we live in a 45m2 cottage).

It took us 3.5 hours from the carpark to reach the hut around 1:30pm, at a fairly leisurely stroll. We were all alone for about ten minutes before the families arrived. Late lunch on the porch meant we had magnificent views across the Wairarapa plains, while getting familiar with our co-inhabitants. After lunch and coffee we sauntered up the mountain for a couple hundred metres to see where we would be going in the morning. We could see the trig, so knew it wasn’t too far from the hut (1.8km). Towards the east and the Wairarapa side it was blue skies, but towards the west all the highest peaks were in the clouds.

Back at the hut, we poured a tipple and went to sit on what looked like a helipad just above the hut for some peace and quiet. It is surprising how noisy the chatter of adults and kids playing games can be in a, albeit big, confined space. Some time later the hut marshals (from Search & Rescue) who had an aid station and checkpoint at the hut also arrived. They brought along a 2-way radio which we had to take with to the trig to provide feedback to base (eg King and Queen of the mountain, weather conditions, injuries etc).

For dinner we had pasta with basil pesto, red onion, tuna and parmesan cheese. I’ve had pasta with tuna, cheese and onion plenty of times, and truth be told, I’m not sure if the basil pesto did much to enhance the meal. Tea and chocolate for desert, before we retired to, what was still, our own room at the time to get ourselves sorted and ready to leave early in the morning.

Darkness fell, everyone was in bed, and only the howling wind and cracking of shrinking correlated iron could be heard, when a bit after 11pm there was suddenly noise and red lights inside the hallway of the hut. The new hut comprises of four rooms: two small rooms sleep six each and two bigger rooms that sleep ten each. The families and us occupied spots in all the rooms, each trying to have some semblance of privacy. Noisily “bedroom” doors were opened and closed, with the “invaders” scouring the rooms for empty spots. Turns out that a group of five or six very late arriving trampers all tried to find an empty spot to sleep. Three of the group ended up sharing with us.

The use of the red-light setting on headlamps has become a thing of late. In the old days everyone just used their normal white brights lights when one had to use the toilet at night, or if one arrived after dark. 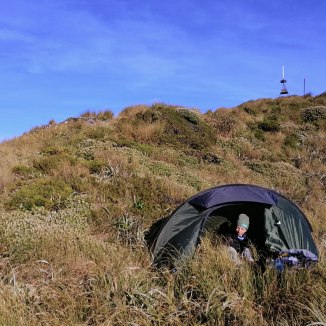 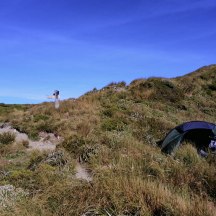 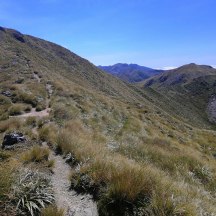 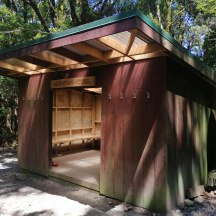 I did not have the best night’s sleep and by 5:45am we were both wide awake. Gerry got up to boil some water for tea (the hut has gas cookers, and even electric lights on timers), and while we were in the kitchen-dining room area, a few others also joined to appreciate the dawn. The wind was still fairly strong (35-40km/h according to MetService), and after breakfast we started walking the uphill to the trig. The wind was tucking at my pack, and every now and again I was blown off my feet. I decided to walk next to the path on the narrowest of ridges.

It is about 1.8km to the trig, but we decided to leave by 7am to ensure we could still pitch the fly of a small tent to serve as a shelter, and rig up the camp stove to make coffee, tea and cup-a-soup throughout the morning. With the wind being so strong I had to built a small little shelter with rocks and stone around the stove to prevent the billy from flying off of the mountain. In fact, to get the coffee powder in the cups proved challenging, not to mention getting the water into the cups. Once, while trying to take a sip, the wind blew the coffee right out of the cup and into my face. With a nice mixture of coffee, citronella oil, sunblock and wind blown tears on my cheeks, I was ready to cheer on the runners (and take a few photos while we’re at it). Quite a sight for (or in this case with) sore eyes (as the constant wind in my eyes turned into one of the worst hay fever, sinusitis-attacks I’ve had in quite a long while).

Apart from the wind, the sun was out, it was fairly warm and we had magnificent views across the mountain in all directions. We could spot the runners coming from miles away. The race can be done in either direction and Mt Holdsworth (where we were positioned) is at about 10.4km when going clockwise, as apposed to about 14km going anti-clockwise. The shorter distance meant we had most of the quick runners coming from the Powell Hut side first. Forty-six in total going clockwise, while the other about 150 went anti-clockwise. A constant trickle of runners kept things sociable at the top and even a few trampers were out and about. With the sun out in full force and it being quite hot, a few runners were out of water by the time they reached us. Some were taking off their hydration packs already as they were approaching us, thinking there might be a drink station. We could unfortunately only help a couple of participants with a bit of water.

By 12:00 the tail-end Charlie came past informing us of two ladies that did not make the cut-off at Jumbo and were officially not in the race anymore, but decided to continue regardless. We could see them approaching on the ridge and decided to hang around as we had to pack up anyway. They reached us by 12:35, and we were on our way shortly before 1pm.

Back at the hut we collected our sleeping bags and some other things we left behind before starting our descent on the very steep section near the hut. Luckily the stairs make it more passable and less of a scramble, but it is still a good quad-buster. Gentle Annie Track, even though rather gradual, is still (to me) just on the wrong side of “comfortable”, easy walking, especially on busted quads. We reached the carpark by 4:30pm on one of the warmest days this summer. We stripped off our soaking wet clothes for dry clean ones, and back in Masterton bought a bunch of cold eats and drinks (ice cream, coffee milk, juice and cherries).

Even though we are not near running anything at the moment, I would love to come back to this race. It is mountain running at its best; steep ascends and descends, narrow ridges, rocky sections, tree roots, some scrambling and generally speaking a tough 24km. One easily gets tricked by the fact that it looks like a short achievable distance, kilometres wise, but the terrain turns this into much more than just a trail or off-road run. Mountain running is, and will always be, another kettle of fish entirely.

Stoked to get a photo credit in the local newspaper! Thanks Andrew.