Clean and fresh in the carpark at Whakapapa Village. 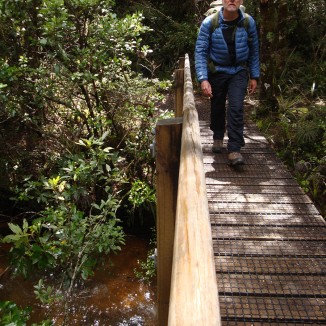 Gerry crossing the Golden rapids – yellow coloured due to the high iron content in the stream. 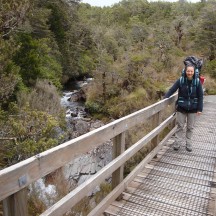 Some good sturdy bridges to cross some streams dry-footed.

Just a nice walk in the forest. 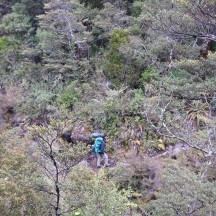 The undulations already started in the first couple of hours.

Due to the rain of the previous night, the track was quite wet. 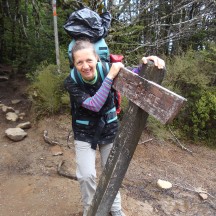 Luckily we didn’t fall down the chute! 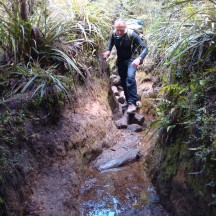 The eroded path resulted in some muddy patches.

In stark contrast, some other areas of the track were very well developed. 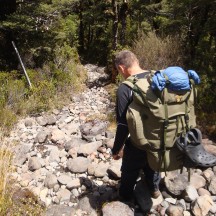 An early taste of the tough terrain to come. 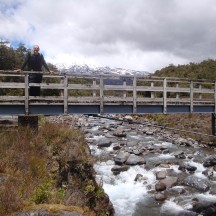 A bridge built in memory of another life lost in the deceivingly dangerous mountain streams.

Fresh dumping of snow on the mountain. 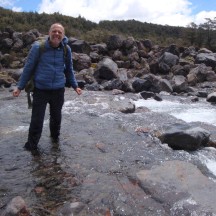 Icy cold streams, too deep to cross with dry footed.

Contemplating the prospect of wet feet for the rest of the day.

Just beautiful views of the mountain whenever you look up.

A final small stream before reaching the hut.

Late lunch on the porch of Whakapapaiti Hut, before continuing on to make up a bit of distance before settling in for the night. 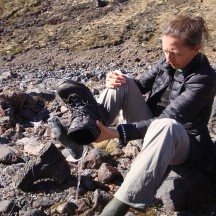 Clearly not impressed by having to pour water from my waterproof boots! 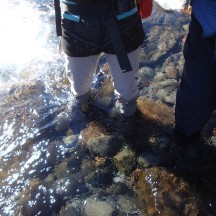 A final cold, wet stream crossing before calling it a day. 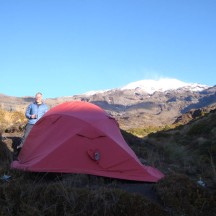 With camp all set up, we were having coffee and cooking dinner with the sun starting to set.

Lying in the tent with our festive Christmas lights, we couldn’t have hoped for a better scene.

The beautiful Mt Ruapehu glowing pink in the evening light.

What was meant to be an early night, early start, drive to Whakapapa Village and start walking early, turned into a very late night (1am), getting up four hours later, load everything in the car, drive the two and half hours, sign in, get sorted and only start walking at 11:11am. (Looking back at our previous trip, it would seem that old habits die hard.) END_OF_DOCUMENT_TOKEN_TO_BE_REPLACED