Me, flying over Dublin Street Bridge! 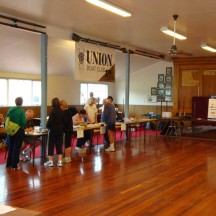 Registration at the Union Boat Club.

The field of 10km runners lining up.

urn around point for the 10km runners. 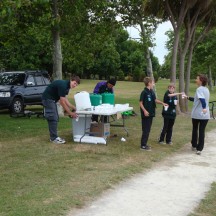 Gerry, nearing the end of the park. The guy in front was doing the 42km.

Gerry at the on-ramp of the Cobham Bridge. 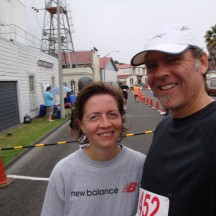 Happy chappies at the finish! After a glass of rehydrate, courtesy of the organisers.

I don’t like the wind. In fact, I want to go so far as to say that I hate the wind. And hate is a very strong word … My granny always used to love the wind. Her theory was that it blows away all the bad stuff and you end up with good clean air. I beg to differ. We once stayed in a small town where the wind could blow an elephant off its feet. And each time after such a, what felt like a tornado, our yard would be littered with flyers, pamphlets, newspaper pages and even crisps and chocolate wrappers from around the neighbourhood (and the air wasn’t cleaner either, but that’s another story altogether). Maybe we just stayed in a collecting corner?

And so it happens that the wind started howling again in Palmy the night before the run. And the more I hoped for it to go away, the more it rocked our humble little home on its polls, swaying in the wind like a Tui nest high up in a Eucalypt. And every time one of the gutters or roof plates rattles, I get such a fright that I would lie there with eyes wide open waiting for the whole roof to lift off. And so it went, right through the night …

At 6:30 we got up, sleep-depraved, had breakfast with good old Rooibos tea and load the car for the trip to Wanganui, about 75km from Palmy. I guess it could be seen as a little bit crazy to drive 75km to run 10km and then drive all the way back, but this looked like a very nice run. Besides, races are few and far between in NZ, compared to how spoiled we were in SA, and it is infinitely nicer to run with other people than running on your own. Gerry pre-entered, so the fact that the weather didn’t look ideal while we were also expecting rain, was not going to hold us back.

We arrived an hour early, leaving plenty of time to pick up our race numbers in the Union Boat Club, off Somme Parade. The race consists of a 42.2km, 21.1km, 10km and 5km events.  A really nice feature of this race is that it is a lapper: the 10km runners do one lap, the 21.1km runners do a double lap (with a little extra loop to cover the distance) while the marathon runners have to do the same course four times. With different starting times for the different distances for runners and walkers at 30-minute intervals, you are almost guaranteed not to be alone. Like an out-and-back race, this is also a very social format where family and friends can cheer on participants who are running past them with every loop.

With a countdown from the organizer, we were on our way on a cool and overcast morning with only a light wind – just enough to cool you down when you start breaking a sweat after a few kilometers. We started off on the western (city) side of the river not far from the middle one of the three bridges – City Bridge. After about a kilometre and a half, we crossed the Dublin Street Bridge going in Raetihi/SH4’s direction, and boy is the Whanganui River wide. You turn left and run a little loop in a beautiful park (this is where the half and marathon runners go a bit further) before returning to continue on the other (eastern) side of the river. While you run in town, having mainly walkways as your track makes this a very relaxing run, as you don’t have to dodge cars and other road users.

You reach City Bridge again at around the 6km marker, where you can hear the commentator at the starting point on the other side of the river. While I thought the race would be run in a figure-8, we were surprised with crossing City Bridge twice. You run over on the one side, cross underneath and run back on the other side, to continue your run on the eastern side of the river.

The 8km marker is on the Cobham Bridge and at this point faint little raindrops (or is it mist?) started to cool the air as we made our way back to the finish line – the “home-stretch” as we like to call it. About 500m before the end, we passed two runners sitting on a bench next to the road overlooking the river, and I overhear the man saying to the women: “we’re not finished, you know”, and I couldn’t help but having a little chuckle at the situation – I know the feeling, so close and yet so far. You pass a street market with the smell of coffee and hotdogs just before reaching the finish, and I thought that the poor marathon runners’ mouths must be watering by now.

Although we’ve only been back on the road for six weeks, we managed a surprising time of just over 60 minutes for the 10 kilometres (we didn’t have a watch but asked someone who finished with us. Will confirm once the results are on the web). All-in-all a great outing, a great race, well organized, three drink stations en route, and definitely one to put on your calendar if you haven’t done it yet.