Shortly before the start of the 20.8km run.

The field of runners rounding the Ashhurst Domain oval.

Was this section meant for the guys and girls wanting to do a full half marathon?

The fairly new path next to the Manawatu River from Ashhurst.

Could only catch up with fellow Strider, Sheryl, around the 3km mark. 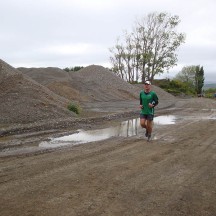 Easy going on the gravel roads around Higgins. 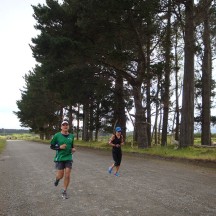 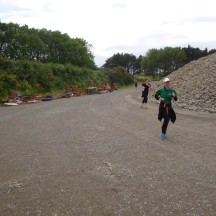 Rounding the corner shortly before reaching the main buildings of the Higgins Depot.

Just past halfway, counting down to the finish.

A nice bit of downhill on the otherwise very flat course on our way to the Bridle Track.

Grateful to have helpers who are willing to sacrifice their Sunday morning to support runners and walkers. 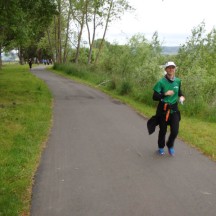 Back in known territory, running along the Palmy Bridle Track. 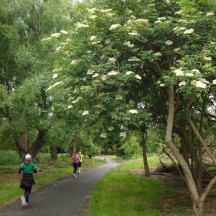 The section of the Bridle Track next to the river with Elderflowers in full bloom. 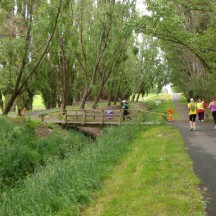 The Gas Works Drain bridge. Not the most romantic name, but a scenic little feature on the route nonetheless.

Some sections next to the river can be quite exposed in bad weather, but luckily we had no such problems on a near-perfect morning. 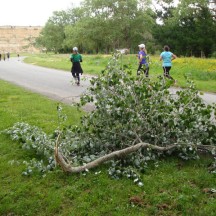 Evidence of the blustery winds of the past few weeks.

Just the short bit through the Esplanade gardens …

… before we reached the finish. 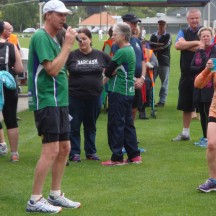 Club President, Kevin, welcoming participants back at the club house, with some of the organising team in the back.

The weather in the weeks leading up to the A2E was, in a word, atrocious. Terrible winds, hail storms and even a mini tornado lashed the country and my hopes for a peaceful fun run in the sun was in the balance. But miracles do happen and on the morning of the event, the most perfect day greeted us. I could hardly believe my luck. The last thing I wanted was another long run fighting gusty winds and/or rain, but thankfully Huey was good to us.

The Manawatu Striders are known for staging great events and this one was no different. Being an inaugural could potentially spell a couple of glitches, but true to their organisation skills everything ran smoothly. At least in our experience as participants in the 20.8km run event.

We caught the early bus at the Esplanade to be taken to the Ashhurst Domain. Several courtesy buses transported runners and walkers to their respective starting points. Gerry helped out with registration at the Ashhurst end, before we lined up with a good number of other runners. 447 participants took part in all the events which included a 20.8km run or walk, and a 12km run or walk. The shorter distance started at the entrance to Higgins in Te Matai Road.

The early morning light wind was just a tad on the cool side, but as the day went on, the weather got increasingly more enjoyable. Starting at the Ashhurst Domain side, we ran a short section around the oval to spread the field out before making our way down the road towards the walkway next to the river. New sections have been included over the past couple of years to extend the walkway from both Ashhurst and Palmy in an attempt to link the two towns. However, a huge chunk of the river front belongs to Higgins and they haven’t consented the walkway extension through their property yet, so special arrangements had to be made to obtain permission for this event to run through their land.

After we reached the walkway, the following about 3.5km is run on a lovely gravel walkway next to the river. My original intention of making this a LSD (long slow distance) run went by the wayside when after the first few kilometres I realised I felt okey and might be able to maintain an even (fast) pace. It wasn’t part of the plan but what’s the use of mind if you can’t change it.

Passing through Higgins’ property for the next approximately 4km, the road was still gravel, but wider and we veered a bit further away from the river at some places. With no vehicles to worry about, we could just trot along and enjoy the run.

Reaching the main gate at Higgins where the shorter distance started, we turned left onto the rustic rural Te Matai Road, a sealed public road. Luckily we didn’t encounter much traffic on the 4km section, before turning left and back onto to Bridle Track for the final 7km on the sealed walkway.

Four water points (at 16, 12, 8 and 3km to go) ensured we stayed hydrated and with marshals and ample signage, there’s no chance of making a wrong turn. We reached the finish at Manawaroa Park in 2:03.10. Gerry’s GPS showed we covered exactly 20.8km, meaning the course was probably closer to an actual 21.1km, as his watch consistently measures about 1% short. I’m sure that some people may feel that if you go the distance it might as well be an official half marathon. Why stop 300 metres short?

This event is bound to become very popular on the running calendar and by adding 300 metres to make it an official half marathon distance (for which there were a lot of requests), I can imagine this event becoming the Striders’ “Summer Half”, while the main 21.1km that forms part of the winter series would remain the “Winter Half”.

The usual banana and sausage sizzle (on the house!) at the finish makes this well worth the effort. A huge thanks to the Striders and everybody involved in this run. These guys know how to put on a great event!

One thought on “Ashhurst to Esplanade – not quite a half marathon (20.8km)”