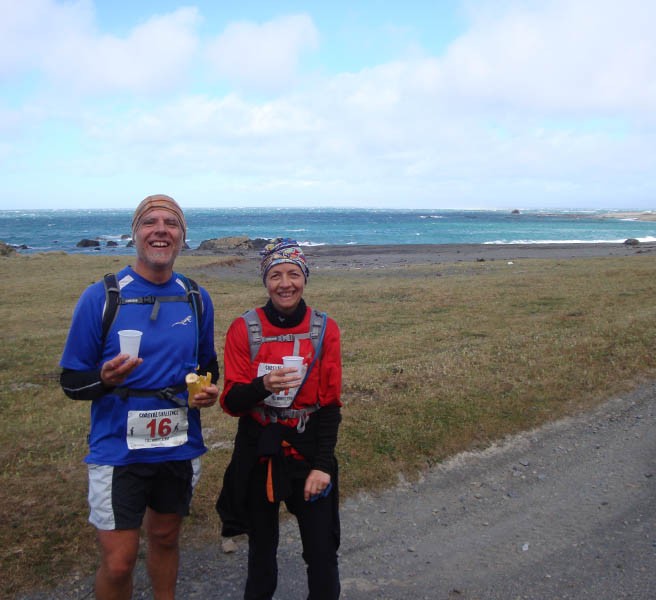 The friendly helpers at one of the water points (at about 19 to go?) offered to take our pic.

Mist and blustery wind at the Miridian Energy wind farm.

Runners huddled up behind the bus. 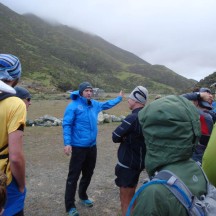 A goat (?) skeleton in the deserted part of the country. 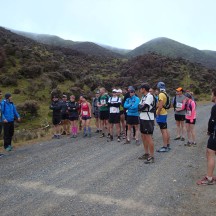 The new start in the road leading to Oteranga Bay.

Within the first kilometre we were in our usual position as the tail-end Charlies. 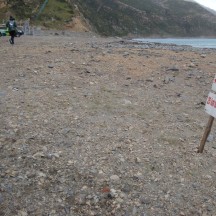 The start of the Mid Monty at Oteranga Bay.

Tough going on the rocky terrain. 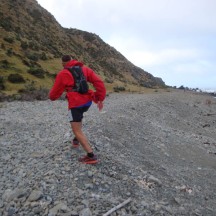 Gerry finding his way back to the “road” after being blown towards the sea. 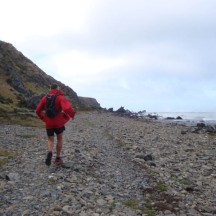 With the strong tail wind we only needed to lift our feet and automatically be propelled forward.

Luckily the rain stayed away and the day turned out not as cold as anticipated.

Rather technical terrain, especially with the wind shoving you along.

A few stream crossings. We could mostly get across dry-footed. 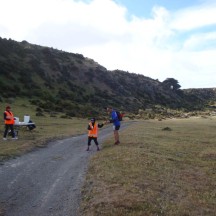 A lighthouse out at sea. 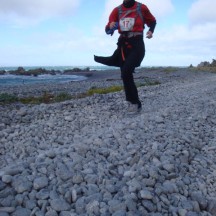 I was very grateful for the more solid surface of the 4×4 track underfoot. 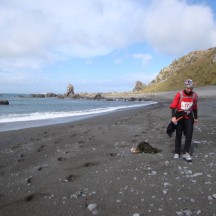 There’s no use trying to run all the sandy parts. 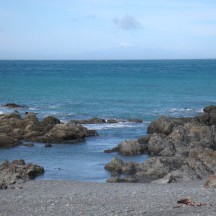 Our scenery included distant views of snow capped mountains on the South Island.

Very tough terrain to try and run, especially for a slow-poke like myself.

Beautiful flowers lining the path to the next water point.

This water point had the privilege of a sheltered shed.

Making our way round the southern most tip of the North Island. 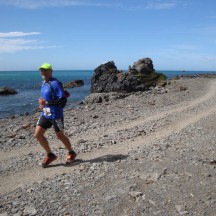 The sun came through turning the otherwise chilly and windy run into a warm affair.

How do you run this terrain?

Back in a residential area, but being a coastal challenge, we stuck to the beach rather than running along the easier sidewalk. 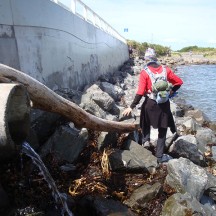 With the various distance options, we encountered quite a few other participants along the way.

Nice scenery along the coast. 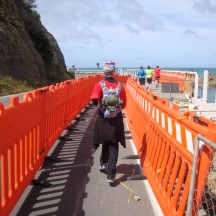 A detour on the sidewalk.

Looking back at the coast line we came along. 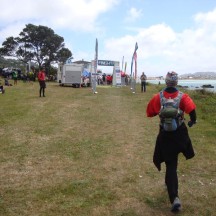 The finish at Queens Drive, about 500 metres short of Lyall Bay.

The Auckland North Shore Coastal Challenge has been a popular event on the Total Sport calendar for the past 13 years. Given its continued success, they decided to extend the event to a series (the Coastal Challenge Series), comprising the existing North Shore event as well as 2 new ones in Wellington and Tawharanui, respectively. Numerous distance options were available – the Full Monty (32km), Mid Monty (25km), Mini Monty (19km), Bay Scrambler (13km) and Beach Hopper (7km).

So this was yet another inaugural event for us, which is always exciting, but does mean that not a lot of info was available beforehand about the event. Total Sport described the series as a “run, walk, wade, scramble and rock-hop”, so we knew we were in for something special.

On our drive down to Wellington the day before, I was a little more than on the edge of my seat about the weather forecast for Saturday. A severe weather warning was in place for Wellington predicting gale force winds and gusts of up to 120km/h. With mixed feelings I was wondering whether there might be a possibility of the race being cancelled.

We spent the night at family and listened wide-eyed as the blustery wind tugged at the front door in the middle of the night. Needless to say, not much sleep was had.

We got up at five to catch the 6:30 bus from Lyall Bay to the start (bus transport was compulsory, as private vehicles were not allowed on the private roads of the Meridian Energy wind farm at Terhwiti Station). The bus was half full. 🙂 As we were making our way along the narrow, winding roads to the start of the Full Monty at Oteranga Bay, the wind was literally rocking the bus up and down the hills, while runners were sharing nervous giggles.

We arrived 15 minutes early and someone asked whether we might stay on the bus until closer to the start, since it was warmer and more sheltered. But unfortunately our bus driver was a rather unpleasant chap (he probably didn’t enjoy having to manoeuvre his bus along the hills of the windfarm!), claiming that he will be leaving straight away (which he didn’t, we discovered). So we all got off the bus, shivering and fighting against the wind, when about 10 minutes later organiser Dave Franks arrived telling us to get back on the bus. The planned starting loop towards the west which would have included a section along the shoreline before heading back over and along rocky cliff-tops, had unfortunately been scrapped because it was feared that participants might be blown off the ridges by the severe winds. Just as well as I was blown off my feet a number of times at sea level!

We were bused about 3.5km back up the road we arrived on, to the new start. 27 runners lined up for the Full Monty. (Another 20 runners took on the Mid Monty, 84 runners and walkers for the Mini Monty, 100 runners and walkers for the Bay Scrambler and 84 runners and walkers for the Beach Hopper, with each event starting further along the course.) The run down the gravel road presented an easy start to get us going, until we reached the coastline at Oteranga Bay, where the start would have been. Total Sport describes it best: “From Oteranga Bay (where the sole power cable from the South Island comes into the North Island) you’ll head along a shingly and rocky 4WD track, rock sections and sandy beaches to Cave Bay. You’ll then be onto the soft sand of Windy Bay and on to the rock section of Owhiro Bay before finally pulling up into the finish line next to the Maranui Surf Club at Lyall Bay. Keep an eye out for the compulsory rock sections and seals! ”.

To say that this was rather technical and tough on your feet and legs, is an understatement. Luckily it was all flat and on sea level. Plus we were even more lucky to have a gale force tail wind! You could literally just lift your feet while the wind helped you forward. On the down side, it “helped” a little too much as we often had to scramble for footing not to be blown over. Luckily conditions improved later on in the day.

After a couple of sections on road/side of the road, we reached the finish a few hundred metres short of Lyall Bay. It also had to be moved to a less exposed spot. Unfortunately no seals were spotted. Our time was 3:36.32 which was faster than I anticipated. Had we done the loop section that was planned originally, we would have taken a fair bit longer.

One thing this race reminded us of in no uncertain terms, is the vast difference between an event like this and normal trail running. The Coastal Challenge required a whole different skillset – running on loose sand, stony tracks and rocks – while on the other hand not having the challenges associated with hilly (sometimes muddy) single-track. I doubt we’ll encounter the same sort of terrain on the Tarawera? Who knows. Having a healthy respect for all forms of water (especially rivers and seas), I’m secretly pleased that the big river crossing that was planned for the section that was dropped, didn’t happen. It’s probably a bit disappointing from an organisational point of view, as well as for more adventurous participants, as this certainly turned the run into a more straight forward beach run. Maybe next year?

I wouldn’t have minded being one of the lucky spot-prize winners who got entries into one of the other events in the series. Just to have something to compare this with. It’s very different to the Cape Kidnappers or the Tora Coastal Challenge, that’s for sure.

I’m pleased to say that I wasn’t completely knackered doing this event only a week after our 60km trail run. This surely must mean there’s progress then!