A perfect early morning start in the foothills of Mt Taranaki.

Start-selfie. with our regular pre-marathon mix of excitement and apprehension.

The first few downhill kilometres combined with the great weather, makes it very tempting to go out too fast. 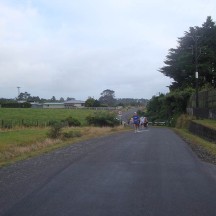 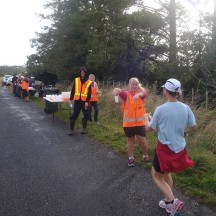 Approaching the halfway mark at Inglewood.

A little out-and-back section in town to make up the distance.

Lots of supporters makes this a jolly changeover. 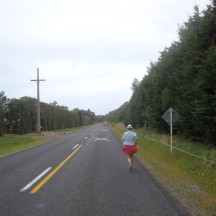 After a good shower, the rain stopped and our clothes had time to dry out. 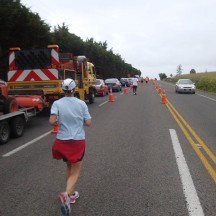 Back onto SH3 with congested traffic.

With one kilometre to go, we got another soaking. Coupled with the wind, I was near-hypothermic at the finish.

Happy, but shivering, at the finish.

Mountain? There was a mountain? As is the case more often than not, Mt Taranaki was tucked in under a thick blanket of cloud all weekend. So much so, that it was hard to figure out where exactly the mountain is supposed to be on our drive to New Plymouth. If I hadn’t been there and seen Mt Taranaki at numerous previous occasions, I would never have thought there’s a beautiful 2518m high volcanic cone, dusted at the top with snow.

Since TUM we’ve cut back on our weekly kilometres quite a bit. Needless to say, the week after the 100km event saw only a couple of walks with one or so short attempt at a “run”. As we didn’t burn it both ends at the Tarawera, our recovery was quite fast. Not that I’m fully recovered one month after the Tarawera, but I’m not injured and okey to do a little bit of training/maintenance for our next ultra – the Two Oceans 56km in South Africa. Apart from sensitive feet on Gerry’s part and a general lack of energy and lethargy on my side, we are nearly back on track one month after the Tarawera. The Mountain to Surf was placed perfectly in the middle of our post-Tarawera build-up towards the Two Oceans.

This is one of those events that we keep coming back to. While we haven’t done any other marathons more than once, this was already our third running of the Mountain to Surf! So why have we done this one three times? I was asking myself that very question as we made our way through the farms towards Waitara at the finish. The weather is almost always an issue. We’ve had a nasty wind in 2008, non-stop rain in 2011, and wind with a couple of proper soakings this year. I’ve heard complaints about it being too hot and muggy on other years, but to be honest I’d like to have a warm, sunny, windless run for a change, as opposed to the wind and rain we’re always getting.

But before I dive too deep into the negatives, let me say that the start could not have been more perfect. We arrived in the foothills of the mountain as the dark sky started tuning blue, with no wind and no rain. The temperature was perfect and the atmosphere and vibe was awesome – I was very happy to be there. It was great to see some familiar faces and to top it off, Ingrid Frost became the first woman in Australasia to have run 200 marathons at this event. Oh, and on that topic, we’ve also learned that the official way to count your marathons (for the 100s marathon club, if you’re that way inclined) is to only count official marathons of 42.195km with results as verification. There also has to be at least three finishers, a race director, and the race had to be advertised, amongst some other guidelines. Ultra’s don’t count, and neither do multi-day staged events.

The first few kilometres of the Mountain to Surf is downhill and could potentially get you off on a faster pace than planned. We trotted along, holding back a little, but with everybody going out fast it is quite difficult to hold back. Within a couple of kilometres it was warm enough to shed my warm layer. Obviously most people made use of the drop-bag option at the start where you could leave your extra clothing for the race organisers to take to the finish, which is really nice. With the imminent rain looming all around us, I was holding on to my layer incase it gets too cold and windy later on. Just as well, as I was shivering like a stick at the finish, being soaked to the bone with a rather nasty wind.

Weaving thought farms on country roads for the first 16km, you almost forget that you’re busy running a marathon. With the weather still good at this point, there were no complaints and we were going great. I even thought that maybe I could try to do a 4:15 marathon – something I haven’t been able to do in many years. But then we reached the first section that runs along SH3 en route to Inglewood, and most of my happy thoughts turned into bleh thoughts. I completely forgot about the fact that you share a main road with cars and trucks, having to run single file and not being able to just chat away the kilometres with your mates. I honestly dread these parts …

After a few kilometres on SH3, we reached Inglewood which was its usual hub of activity. The relay teams have a change over in Inglewood and it also marks the start of the half marathon. The aid station is stocked with bananas and watermelon, portaloos is a welcome sight, and lots of support in the streets of the small town is enough to give anyone a lift.

The wind started picking up a bit but knowing that the first half was done, we continued in high spirits along SH3A. The high was short lived as another dreadful busy stretch of sharing the road with vehicles speeding by, coupled with lots of road works, had to be negotiated. At times there were literally no shoulder on the road, and your choices of terrain were either in the road on the tarmac dodging vehicles, or next to the road on the grass and gravel. Passing other runners/walkers with oncoming traffic was almost not an option. With already narrow roads, further reduced due to roadworks, it really wasn’t any fun. At the 28km mark running into a headwind, the heavens opened up and gave us a proper shower. Luckily it was over within a few minutes and our clothes had time to dry out.

Continuing along the busy main road with a headwind and being soaked, I questioned my own sanity for doing this marathon a third time. Why do we keep on coming back for more? Could it be because it was our very first international marathon? Is it because “mountain” and “surf” automatically conjure up idyllic scenes causing one to forget everything that’s in-between? Whatever the case might be, we were there and we had to get to the end.

At around the 32km mark, we were finally off the main road again and back on the quieter country roads. When Gerry told me what our time was over the first 32km (3:14), I knew that a 4:15 time was most probably out of the question unless a miracle happened, but was hoping to make 4:20. Between 38 and 39km we ran yet another stretch on SH3, this time in the middle of the road, protected with cones on both sides from the congested traffic. Running the last few kilometres through the streets of Waitara and one kilometre to go, another very strong gust and proper shower soaked us again. The headwind and horizontal rain nearly blew me back in my tracks and I had to stop for a bit to get my bearings. Quite sore at this stage, I knew we couldn’t be too far from the finish and was rather relieved when I rounded a final corner to see the finish line about 200 metres ahead and with about one and a half minute to make my 4:20 target. Walking would not have gotten me there in time, so I dug deep and only just made it with 10 seconds to spare.

Relieved and happy with my time, we received medals from former race director, Neale, before indulging in another banana and electrolytes. I was shivering and freezing cold, not far from hypothermic, but luckily the sun came out for a wee bit while we waited for a friend to pick us up. Back at their place, I took a very warm bath (not the best thing to do after a tough run!) and tea to get my temperature up again. It started raining again, which lasted for the biggest part of the remainder of the weekend.

We were treated to some bubbly, fantastic food, more wine and dessert, while the rainy day turned into night unnoticed. The end-result is again one of happy memories. We may well be back for another running of the Mountain to Surf!

One thought on “Mountain to Surf – New Plymouth”