Us two at the start in the town square.

Fancy dress was the order of the day.

Me and some ape hanging around in the gutter shortly before the start. 🙂

Running through vineyards and on quiet small town roads is just awesome.

One of the musicians. He played some good ol’ rockers to help keep our pace up.

Couldn’t believe the weather. Another perfect day in the Wairarapa. 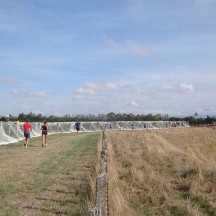 The private farms and vineyards are normally closed to the public.

Having a laugh with fellow participants who we met at the campsite the night before. 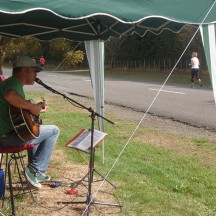 Even the stretches on the larger roads were virtually traffic-free. 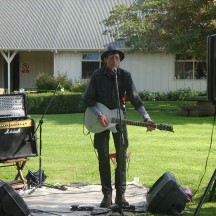 More music to add to the festivities. 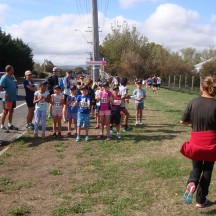 These youngsters waiting for the first few speedsters in the 10km event to come through before taking off on the last 3 or so kilometres.

Running around the vineyards next to shelter belts.

Gerry on another loop around the vines.

The barn band providing lots of entertainment on the route.

Gerry not holding back on the tastings. 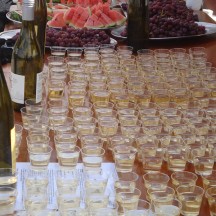 But with such a spread, who can resist.

A band on the school grounds about 1.5km before the finish.

“Welcome home darling, the roast is in the oven. Have a glass of wine.” The Desperate Housewives drinks station was my favourite.

The largest number of participants is surely in the 10km walk?

Nice to see there’s still some hippies around! 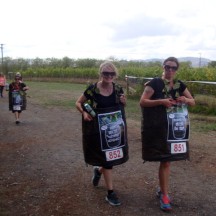 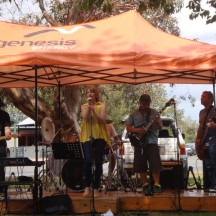 Band at the square keeping everybody entertained throughout the morning.

Sausage sizzle and a glass of wine to finish off a great event.

Prize-giving where it was mentioned that the event drew some 1500 participants.

This event is an absolute MUST on every runner, walker, crawler or otherwise breathing person’s calendar. It is the biggest jollification around with everybody dressing up and getting into the spirit of things, from the marshals to the drink stations, ushers and organisers. Words cannot describe the fun that is the Round the Vines.

We were not going to do the event this year because of work commitments. But a short-notice change in our schedule meant we had the day free and decided there and then that we will drive up from Wellington on the way back home, making the stopover at Martinborough to do this event. We found a campsite in Greytown and spent the night before in the local hotel bar, having pizzas and listening to a local band.

I promised myself last year after doing the Round the Vines for the first time and seeing how much fun it is, that when next we do this event it will only be the 10km, to be able to take it easy and really sample all the wines on tasting around the course. Of course this time we’ve entered for another ultra and needed the training, so opted to again go for the half marathon instead. That didn’t stop Gerry from sampling wine from the very first “water” table, to the very last one. With such a wide variety on offer, who can resist the temptation? I was a bit more cautious, but when Gerry mentioned that it makes no difference, I decided to give it a go and what do you know – I had no nasty comebacks from sipping wine at the drink stations! I guess if you are going for a time, it might not be the best choice of drink, but when you take it easy and just do a fairly slow training run, it’s not the worst thing in the world.

Despite a threatening Cyclone Pam starting to make it’s way over the top parts of the country, we could not have had a better day out. It was rather warm and with only a light breeze to cool you down, I suspect it was steaming hot inside some of the dress-up costumes. As usual there were musicians all along the route, the aid stations were all stocked with at least watermelon, grapes, wine and water. The course is well marked with ample signage and marshals at all the turning points.

All-in-all well worth the effort. With all the effort going into the organisation, one can only hope it will grow from strength to strength. With a great turnout of 1500 participants this year, it just goes to show what a gem this event is. Maybe next year we will be better prepared and indulge even more in the festivities of the day, including properly dressing up for a change. A great event. Do it!