Gerry at about 6.5km. The morning was just cool enough to justify starting with a second layer. 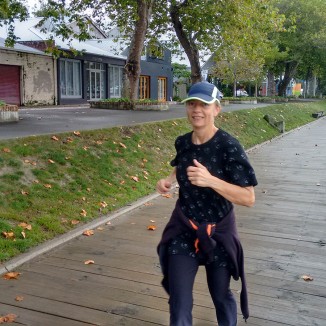 A drizzle to keep us cool. 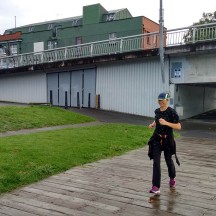 Passing the middle bridge of the 3 Bridges event.

Nice walkway next to the river for miles and miles.

Not too far from the river mouth. 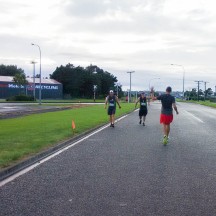 On the way back. We were too pre-occupied to think about taking pics between the last few kilometres and the start of the event.

By this time the sun was very hot!

Gerry going strong after about 21km. 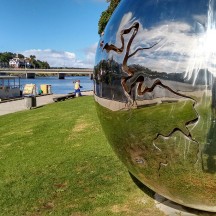 A prominent feature in Whanganui. 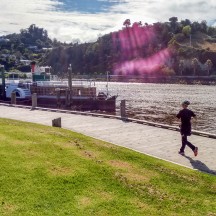 City centre. Only about 7km to go.

I am finding it increasingly more difficult to write objectively about events. Simply because I love doing events! The vibe, the people, the support, the fact that you get your training done with others – what’s not to like?

Although the Brine-to-Wine event is a 16km point-to-point, Gerry and I decided to turn it into a double lapper (ala Perry Newburn) in order to do our customary 32km run three to four weeks out from a marathon. We’ve found that it doesn’t make sense to go farther as you “break down” more than you “build up” (unless you’re very fit and run 80+km per week). What you don’t want is for your longest training run to set you back too many days so that you can’t continue your daily training. And 32km is a great stepping-stone between a half and a full marathon. You start to fatigue and get the feel for running on sore legs, but it doesn’t push you completely off the rails. And besides, being a point-to-point event, we had to make a plan to get back to our car. So why not park at the finish? 😉

I somehow miscalculated the time it would take to run the 16km from the finish to the start. For starters, I had the number 15km in my head when I tried to figure out a reasonable starting time. And apart from that, we were late … The drive to Whanganui, plus finding the Top 10 holiday park took a bit longer than expected. So there we were at the finish, about half an hour later than our planned start. Still, I thought it was enough time, so started off on a slow trot. Leaving the house quite early and having to drive and hour+, I urgently needed to make a wee-stop, so at the first empty plot, we jumped the fence and made for the bushes. Then at about 1km we realised we forgot to bring the water bottle along. So off to the nearest loo for a sip of water, which we found at about the 2km mark. And that was our only hydration on the way to the start. I think it caught up with me later …

A light drizzle kept us cool (chilly) in the first few kilometres, but luckily it wasn’t too cold or windy and we had a pleasant run. Since we haven’t done this event before, we weren’t sure about where the course runs. But a friend wrote some directions and provided us with a map so we were merrily making our way down the river walkway toward the sea. When we reached a little stretch that runs between houses at about 8km, I suddenly realised that we still had 8km to go, with only about 50 minutes to spare before the start of the actual event. Although doable, I didn’t plan on going faster than a 7min/km pace. The whole idea was for this run to be a LSD run (long slow distance). But we had no other choice than to pick up the pace a little and try to make it in time to still register and make a loo stop before starting the official event.

And then we got lost. The organisers changed the route and we couldn’t figure out where to go, so made a wrong turn and when down the wrong road. By then we were well and truly in the industrial area, so not a whole lot of people around to ask for directions. Luckily Gerry had his phone with him, so Google maps it was. We could map the way to the start at the Pavillion Boat Club and although there were no shortcuts, we ended up dashing across a park to the start, instead of adding the little bit around the parking area and park. Hence the 500m shorter than planned course.

While we registered, the small field of participants were already lined up a few metres from the registration desk. With numbers in our heads (they ran out of printed numbers and the pen wouldn’t write on our sweaty hands) we ran to the start just in time to take off on our second “lap”. No rest, no stops, no water, no loo, no nothing. Just a dash past registration, to the start and off we went on the next lap. Needless to say, within 200 metres, we were dead last and within a kilometre, we didn’t see another runner until the finish. By now we were prepared for the unpleasant flavours around the industrial area, we made peace with the fact that it was going to be a long solo run, and also knew that once we passed the last bridge, there is only 3.3km to go.

Not sure if is was the speedy session in the middle or the lack of hydration, but I was quite tired and my feet rather sore. I was going at a snails pace, but at least was still moving. Sort of. After 3 hours and 30 minutes, we staggered into the finish area with cheers from Rachael and Kathleen, which immediately lifted my spirits! For the most part it felt as if Gerry and I were the only two people out on a Sunday morning long-run.

Unfortunately, we were too late for the cold drinks at the finish but was glad to indulge in the free sausage sizzle. And what a great treat it was to get some fresh grapes while waiting for prize-giving. Happy with what we’ve managed to achieve for the day, we drove back to Palmy. We might even do this again next year!