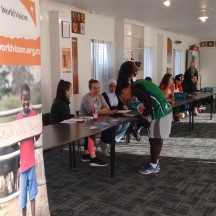 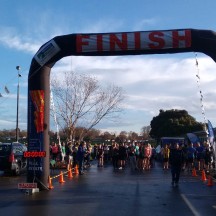 Palmerston North Boys High did all the talking and even had a band playing. How cool is that!

Cool World Vision wrist bands were handed out to participants.

Unfortunately only a small field for this event.

Going round the bend – a very familiar part of the Super 7s event.

A few puddles to jump, if you can. 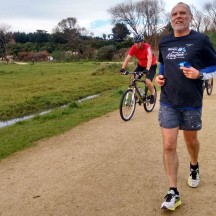 Gerry turning at the far end of Waitoetoe Park. 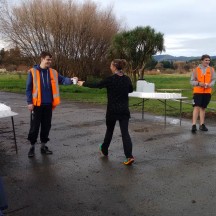 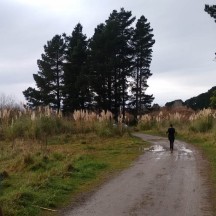 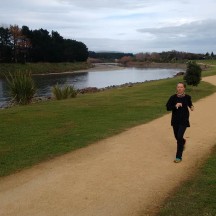 Downstream from the bridge, the Bridle Track received a new layer of grit shortly before the Palmy marathon.

The Stride for Syria intended to raise funds for the Syrian Refugee Crisis. It is labeled as “the most urgent humanitarian crisis of our time” after six years of ongoing fighting and conflict in Syria. According to the brochure that was handed out at the event, 470 000 people have been killed, and more than 4.8 million have fled the country, while 6.1 million have been displaced. That is nearly three times the population of New Zealand that is either dead, misplaced or having to flee for their lives.

So, PNBHS World Vision decided to host a running/walking event, with help from the Manawatu Striders, to raise some funds for the Syrian crisis. (If you wish to make a donation, visit the NZ World Vision website.)

We arrived at about 9am to register and quickly go for a 4km trot before the actual event started at 10am. Going upstream, we ran 2km along the Bridle Track before turning around and running the 2km back. On the way out, we ran into Glen W, whom we had only known from Instagram. Nice to finally meet in person. Although it was quite cold, it was a windless, calm day with little pockets of sun still shining through the clouds early on. Back at the club rooms, we had time for a quick catch up, a sip of water and a trip to the loo. It was great to also finally meet Christine T in person – another online friend.

The school boys and girls did a good job of handling the formalities with guidance from the Manawatu Striders. Starting at the club rooms, the course followed the routes of other Striders events. The first bit is partially on the Super 7s course until you reach the river where you turn right to follow the marathon course downstream, around Waitoetoe Park and back the same way to the club rooms. These are trails we know very well, but it was still an enjoyable run away from the roads, through parks and next to the river.

With an entry fee of only $5, which included a sausage sizzle and banana at the finish, I’m surprised at the very small field of participants. One would have thought that at least both the schools’ students and their parents should have known about it, and made the effort?

Be that as it may, I’m pleased to have managed another run without much pain. Now to see how things will go at the half marathon in a week’s time.