At the start of the walk at the i-Site – just the two of us.

Not sure whether to wear a windproof jacket or a warm jacket, Gerry stopped to swop his top layers.

The sea of orange shirts up ahead.

Soon the orange snake were behind us, as well as ahead of us. 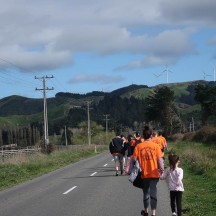 Young and old came out to support.

Early on the gravel road the gradient was still manageable.

Until we started to climb considerably.

The windfarm remains quite a sight from up here. 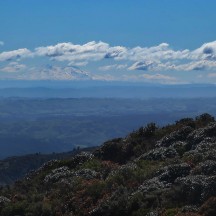 The snow-covered Mt Ruapehu in the hazy distance. 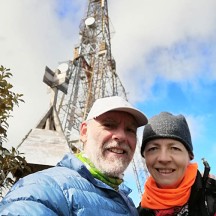 Finally at the trig.

Running downhill is so much easier.

Tracey in the middle, only a few hundred metres from the top.

Going down is fun, until afterwards when your quads are minced.

A narrow bridge we all had to cross on the way out of town, which was insanely busy.

We recently found out about a young Palmerston North woman by the name of Tracey, who was diagnosed with multiple sclerosis a couple of years ago. She received a grant from the Mastering Mountains charitable trust to walk the Inca trail to Machu Picchu, and is currently in training by Massey Sport and Exercise student Arbie Hong. In an attempt to raise money for the MS charity, as well as creating awareness about the illness, she organised the Woodville to Wharite Peak walk. Not only did she organise the walk, but also participated to see how she would manage and ended up walking the full 14km up to the peak in only 3.5 hours. With Woodville at about 92 metres above sea level and Wharite Peak at 920 metres, it is a tough uphill and no easy feat.

Gerry and I were a bit late to the party, and arrived shortly before everybody (around 80 walkers) took off. I was still getting our gear sorted in the car, while Gerry ran ahead to join the other participants for race-briefing (he was too late for that, but made it onto the group photo). Once everybody took off, we were still searching for a toilet. After enquiring at the I-Site, it turned out we passed right next to it on our way there. Finally we were off too, about 15 minutes behind everybody and could only see the stream of orange event T-shirts snaking up Oxford Street in a distance making its way toward the peak. We could potentially ran to catch up, but just didn’t feel like it. It was a walk after all.

The first roughly 3km were through the streets of Woodville and out towards Wharite Road which is a good gravel road. Four event vehicles were traveling alongside, to pick up tired walkers or those who could only cover a short distance before having to turn around. The vehicles were also there to take participants back to Woodville where everyone would meet afterwards in a pub for a drink and a bite to eat. It was great to see so much community support, and people from all walks of life took part. We slowly started catching up and passed quite a few of the other walkers on the hill.

Phil (from MEET) kindly offered to do the traffic management, and the only other familiar face we encountered was James, another Striders member.

The weather wasn’t too bad. Only a few clouds, so mainly sunny, but the wind was blowing a gale. And it was a very cold wind to boot. Once you turn off of the Wharite Road onto the Private Road that takes you to the top, it is another 3kms of serious uphill. Worse than any part of the previous 8km on the gravel section.

A heap of walkers made it all the way to the top in T-shirts (don’t know how they do it!), while I was wearing three layers, including two “buffs” and a beanie, and I was still cold. The higher we got, the icier the wind. The gale nearly blew me off my feet a few times, and my hands ended up too numb to get snacks from a ziplog bag.

Once we reached the top, Gerry and I quickly made a trip to the trig before turning around and starting to run back. We haven’t made a contribution to the charity yet at the time (it was a late decision to go), and it didn’t feel right to make use of the vehicles to take us back, or the water that was handed out en route. We still had enough in our hydration packs anyway, and besides, we desperately needed the time on our feet. On hindsight, I now realise that to run back could have offended some people, given the cause of the walk. I honestly didn’t think of it at the time, and I sincerely hope we didn’t offend anyone. That was certainly not our intension.

Glad to finally make it back to the car, we went to the nearest coffee shop for some warm coffee and a bite. It was too late for some of the small-town eatery kitchens who were mainly closed already, so we couldn’t get hot chips. Not that we tried every place in town, but after the second one, we gave up and went for the sweet stuff.

Covering the 28km had a dual effect – on the one side I was happy to be able to cover the distance (event thought I was rather sore at the end of it), but on the other hand I’m very worried about the fact that I have to cover more than three times this distance in two weeks time. Luckily the 100km is not so hilly, so I’m hopeful of making it to the finish within the cut-off time. Fingers crossed.