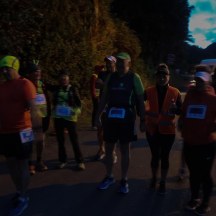 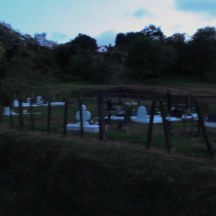 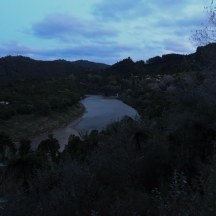 Beautiful views from early on. 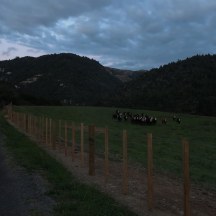 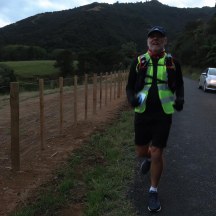 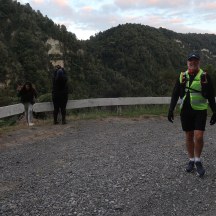 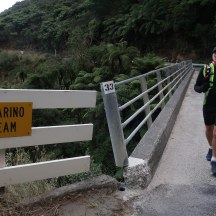 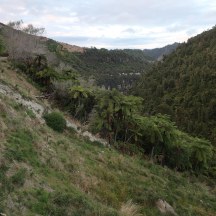 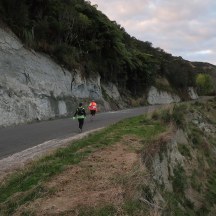 Sun starting to come through. 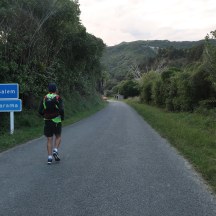 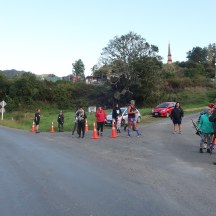 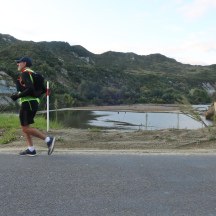 Cosy kayakers on the river. 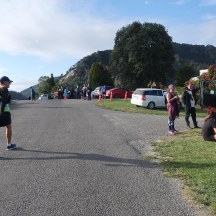 Gerry on his way into the Marae to top up his water bottles. 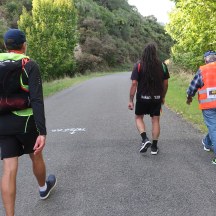 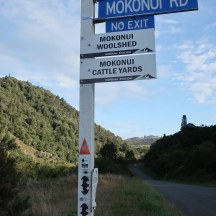 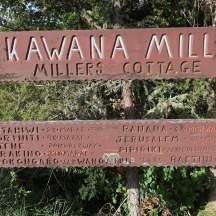 All the Marae in the area we passed.

Stil found the breeze really cold, especially on my throat and ears. 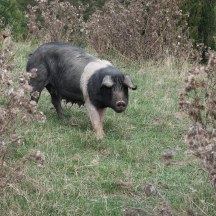 This little piggy went to … 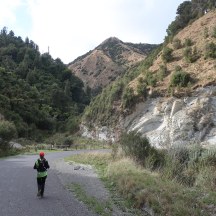 Transition point at 15km to go.

Fuck this shit. I’m done. At least that’s how I felt at the time. 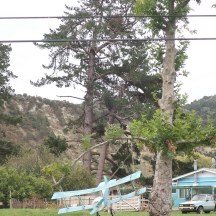 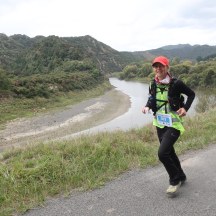 Finally at the finish, and what a great welcome we received!

A whanau celebrating at the finish.

Race bibs, and we ironically also finished in that order, event Ts and bling.

What could have been an “easy” jaunt in six to seven hours, turned into an LSD run of more than eight hours on our feet. Just as well, as that is exactly what we need in preparation for the UTA. In terms of specificity, we were well off the mark with this event, but it was a good way to force ourselves to get the time and distance in.

Just to put it in perspective. Four years ago we did an on-road ultra (the Two Oceans Marathon) in 6:43. This was a mere two months after our first 100km event, and only a month after a speedy (for me) 4:19 marathon. Needless to say my legs hadn’t recovered from the 100km event, let alone the speedy marathon a month later, which all proved too much making the 56km ultra a very hard day out. But having said that, I still managed a pretty respectable time compared to this time around.

Fast forward four years, and another on-road 56km (+1) rolls around and it takes my 8:22 hours to complete. This is the difference between reasonable fitness, but tired and exhausted legs, as opposed to just plain lack of fitness and fresh(-ish) legs. An on-road race like this can easily be done at a six minutes per kilometre pace with some form of basic training in place. However, at the risk of sounding like a broken record, our training is honestly up to shit. We just cannot seem to get on top of things. But enough about my sorry, half-arsed training regime.

We got up at 2:30am, to leave Palmy at 3:15am, to meet Damien at 4:30am in Whanganui for the trip to the start of the race. Rob offered to drive us three to Whanganui where we left Rob’s car at the Pungarehu Marae (at the finish of the event) before we all hopped into Damiens van together with his family for a ride to the start of the event at Pipiriki at the entrance of the Paraweka Marae. Thanks Rob and Wood-whanau! It was still dark and quite cold so we stayed in the van as long as possible. Before we left Palmy it crossed my mind briefly that a headlamp might be helpful, but promptly put that aside as it should be light enough by 7am. Little did I think about the fact that the start might be dark and finding the loo (also without any form of light) might be a problem. Nonetheless, with the help of my phone torch to find my way around, race briefing and karakia took place around 6:45 after which Uncle guided us all through a warm-up session, which was great fun and also set the tone for this community event.

We were meant to start at 7am, but due to the cloud and darkness, we were only off at around 7:10am. Five of us were registered as solo runners, of which one was a DNSer. That left four doing the solo. All the other participants (approximately 150 in total) were part of teams as this is actually the Whanganui River Road Relay and meant to be done by teams.

Damien was out of the starting blocks like a rocket and we never saw him again until the finish. Rob unfortunately fell ill somewhere after the marathon mark and had to withdraw from the race. That left only three of us in the solo event and with Damien pulling a speed monster on us, that left Gerry and me to bring up the rear with some of the slower teams.

The race started off on a steep downhill before having to make our way up the first hill followed by a nice downhill stretch before ambling up the biggest hill of the day. Even though one might think the course should be fairly flat following the river, it is far from it. Rather, it is quite undulating, but with reasonable fitness completely runnable.

We decided early on to walk all the uphills, and run the downhills and flat parts. Everything went okay up to the half marathon mark when things went a little pear-shaped. I entered the pain locker and for the remainder of the course (nearly 6 hours) I was in agony most of the way. After 45km even the downhills became a challenge to run. By that stage I was already walking all uphills and the flat bits. Of course I was cussing about my lack of fitness and training, but in my defence, we had family visiting and in an attempt to spent every possible minute with them, we couldn’t run for three weeks, bar three unmentionable outings.

And then my mind started playing tricks on me – I couldn’t distinguish between slight up and downhills anymore. They all seemed to go uphill, and hence I might have walked quite a few slight downhills thinking they are actually going uphill!

Since we were going fairly slow and never exerted much energy, I was quite cold all the way. I started off with two vests, a t-shirt, a thin down jacket, a beanie, two headbands, and gloves. After the first big hill I removed the down jacket but was on the verge of being too cold for the remainder of the course. My beanie and gloves only came off after we passed the halfway mark and even then I was mostly on the cold side. I hardly worked up a sweat and the cold breeze was almost too much for an already sore throat and ears. Yes, I picked up a cold of sorts earlier in the week and woke up the day before for a sore throat. It didn’t feel too serious, so I went ahead and did the event.

The course is divided into seven legs with distances of: 12km (Paraweka to Hiruharama), 5.7km (Hiruharama to Ranana), 5.3km (Ranana to Matahiwi), 8km (Matahiwi to Koriniti), 11.4km (Koriniti to Atene), 12km (Atene to Parikino) and 3km (Parikino to Pungarehu). Each of these transition points is at a Marae where water could be topped up. Participants get ten hours to complete the course which is very generous. The Two Oceans only allows seven hours to complete the 56km ultra marathon. But then this event is not about high performance, but rather focused on participation which is quite refreshing.

Having all the teams around with their support crews made the outing quite a jolly affair, with supporters cheering us on, and some offering drinks and eats. We were passing, and being passed by the same vehicles and the occasional runners/walkers for the biggest part of the day and even though we didn’t encounter heaps of runners and walkers, it was still a very social outing with all the support vehicles around.

With 15km to go, we reached the only transition point where, in addition to water, bananas, apples and some lollies were also on offer. By this stage I couldn’t imagine how I could possibly get to the finish line, but by hook or crook and with constantly moving forward we eventually got there. What felt like a lifetime of pain and suffering, also passed and was soon forgotten. As is always the case, hence signing up for the next big challenge doesn’t take too much convincing!

We were made welcome at the finish by everyone, handed a medal, and also had our photo taken. My first win! 😀 (First (only! haha) female home.) Shortly after this, some of the teams finished together, and did a song at the finish before receiving their medals. It was simply beautiful to watch and hear and I wish I understood the language and culture better.

This is a great community event with a lovely atmosphere and I’m very happy and thankful that we could be part of it.