What to do when you’re a crowd of three? If not the three musketeers, the three wise men, three blind mice, three little pigs, three Stooges or the Bee Gees, it has to be the three wise monkeys!

Nettie, myself and Gerry at the start on a lovely sunny, albeit chilly, morning. [Photo © Johann van der Merwe] 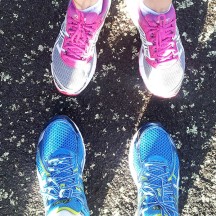 Coronation Street, Norsewood. Bustling with activity outside the registration venue.

Participants were invited to dress up for the event, but only a few fancy dress outfits were around at the start.

Looks like a huge field shortly after the start. Keeping clear of other runners, cyclists and support vehicles proved quite a challenge on the very narrow country roads.

Lots of rain the previous night made the roads shine in the sun.

A short out-and-back section with the turnaround point at the 5km mark. 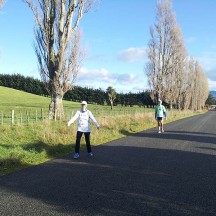 Not sure what the scarecrow in the front was trying to do … :-). [Photo © Johann van der Merwe]

Johann with a bounce in his step thanks to his new shoes, while Nettie is jogging along comfortably. 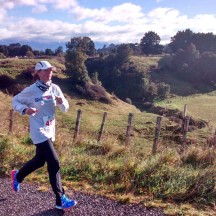 A nice downhill in a valley.

Blue skies and a winter sun helping to warm us up. 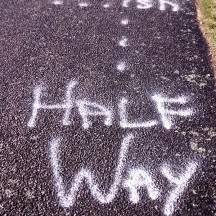 Yeah! The 10km point also had a “woohoo” in the road. These types of signs give me a smile everytime. 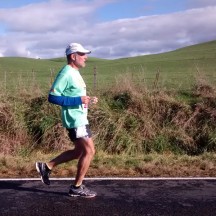 I just love these country runs.

Very happy to have a sunny run after the night’s rain. 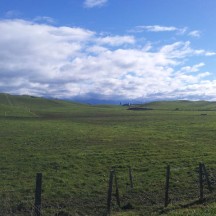 The last kilometres is run through the small town of Takapau.

Since the Wellington marathon three weeks ago, we ran an average of four times per week. Not too bad, I guess, but not as much as I hoped. There were too many days of foul weather and laziness. We also did a trail run, the first of many more to come leading up to the Tarawera 100. Yep, we took the plunge and entered for the beast – something I’ve been wanting to do for the past few years. (Am I repeating myself?)

As is always the case (at least for me) with your weekly long-run training, it is so much nicer to cover the distance with other people. Knowing you’ve got company out there, even if you don’t utter a single word to anyone else, is enough to make the run easier. The joys of running for most people might be that they get alone time. Time to switch off and have only their own thoughts to keep them company. I get that. I do that too! But I still prefer to have other people around, just to see them even if I am caught up in my own thoughts and pretty much ignoring everybody else.

A bit more than an hours drive from our place is Norsewood, a typical NZ small town in the country. They play host to this wonderful fun half marathon event that is proudly supported by the Takapau & Norsewood Lions Clubs & Sport Hawke’s Bay with profits donated to local community causes. Besides the half marathon run other options include walkers, various relay options and a cycling event (covering 20, 30 and 40km).

Terrible weather during the week leading up to the event (especially in Northland where lots of people were stranded, roads and farms flooded, roofs lifted off houses, and whole areas without power) had me worried that we might have to fight the weather as well as the distance. During the night it rained on and off, but when we woke up the rain had stopped and as we drove to Norsewood the clouds also started to clear. The day turned out beautiful with blue skies and only a light wind.

The start of the point-to-point event is at the Norsewood School and the finish at Takapau School, in Takapau, another small town some 15km away. Included in the entry fee is free transportation from the finish to the start or vice versa. The local community helps out with ute’s and mini buses etc to transport runners, cyclists and bikes from one point to the other.

Johann and Nettie joined us for this country event and the four of us hopped into a mini bus at the finish, to be taken to the start. With snow on the mountain tops in a distance, the light wind was still a bit chilly for me, but a nice cool down for most other participants.

Different starting times were available for social and elite walkers, runners and cyclists. Unfortunately we ended up in a combined group of social runners and cyclists. Although a very small field (25? runners and 40? cyclists) the start turned out a bit chaotic and the first four kilometres saw lots of support vehicles, cyclists, runners and walkers all trying to find their way on the narrow roads. At 4km the runners had a small out-and-back section which gave the cyclists time to speed off ahead of us.

The run is on small farm roads in the countryside between farms with sheep and cattle grazing on rolling green hills. With absolutely picturesque surroundings, one hardly notices the task at hand. I was feeling okey and decided to just go at a slightly faster pace than we normally do for our daily run. Not wanting to know our pace, I was hoping that my effort didn’t just feel fast, but would in fact be a bit faster than usual. When Gerry told me we were still three minutes shy of two hours at the 20km mark, I was pleased with my effort. With only a couple of hills reducing us to a walk, but otherwise a lovely undulating course, we managed to finish in 2:03.

This is a beautiful run in the country and we couldn’t have hope for better weather. The last kilometre is run through the town of Takapau and the finish is in the road next to the school. Congrats also to Nettie for completing her second half only three weeks after the first. We stayed for prize-giving and between the four of us, three got spot prizes – two pots of honey and a water bottle. 🙂