And a few more seconds, aaaaand … 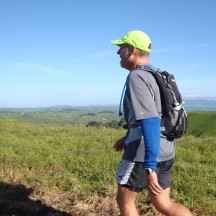 Shortly after we turned onto the trails, we were treated to this stunning view over the Waikato. 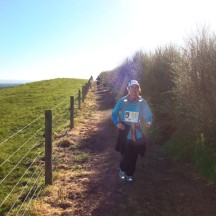 The sun only just out, but already quite warm. For the most part plantations and indigenous forests sheltered us from the worst sting of the sun.

Gerry speeding around the switchbacks on an early steep downhill.

Happy for the downhill stretch. 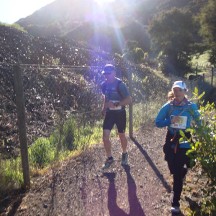 Gerry, myself and Paul (pictured left) where the tail-end Charles’ at this point, with the sun at our backs. 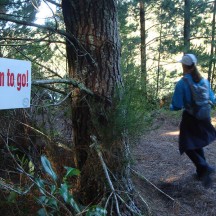 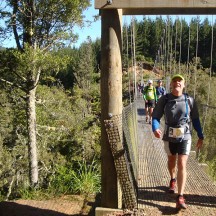 Gerry having crossed the first and largest swing bridge.

An open section where large sections of plantation have been cleared.

Slowly but surely we chipped away at the kms.

A wonderful, wide, easy, forest road where MTBs could pass with ease. 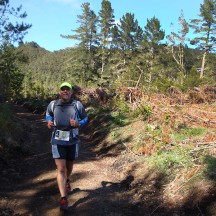 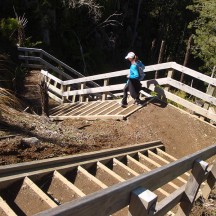 Down a steep gorge with some spectacular scenery. 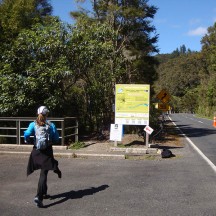 Approaching our first water station – a welcome sight after about 18km. 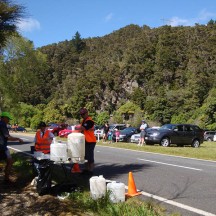 This was also the start of the 42.2km event.

Having a runny nose due to the cold air, and continuously having to blow my nose, feels like a waste of breath. 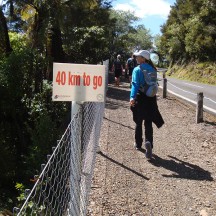 One third down, I was wondering how I would ever make it to 60km. 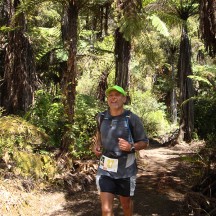 Large native ferns to shelter us from the sun.

Another steep downhill. As a fellow runner noted, steep descents really are a waste of a good downhill – you lose all your elevation without the privilege of a long, easy descent.

Another milestone. By this point I was pretty stuffed, and remained that way to the end.

Enjoying the perfect weather and the good conditions underfoot. 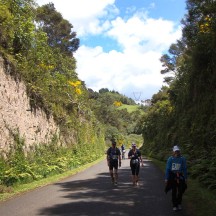 Strangely enough we had more interaction with other participants, than what we had on most other road races.

More friendly support at the waterpoint at about 32km.

Slow down, Gerry! We’re in an urban area. Entering the historic riverside town of Mangakino. 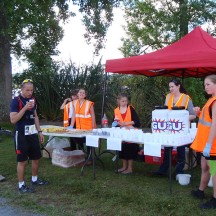 Big was my surprise to find the 21.1km to go marker, as the 20km to go sign was about 3kms down the track! Speaking of mind games, this one really got to me. 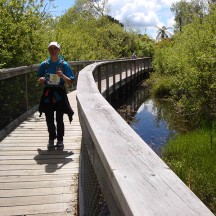 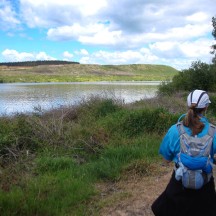 Running with constant views of Lake Maraetai to our left.

Another crossing on a swing bridge.

The flatter terrain of the last 20km helped to keep us going at a reasonable pace. 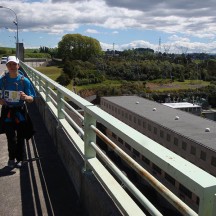 Crossing the river at the Maiterea Power Station.

I just had to have a sit down at this water point, while drinking my GU Brew. 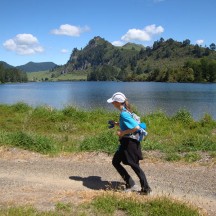 Running next to Lake Whakamaru. 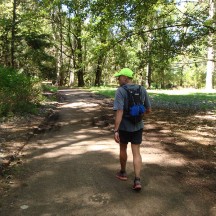 Come on dear, we don’t have all day. 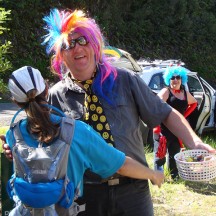 This bunch was such a happy sight at about 4kms to go. Free hugs and jelly sweets were handed out. 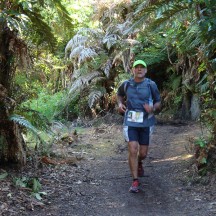 The last section had lots of tree roots to trip over – a real challenge when you can no longer lift your feet.

Crossing the narrow road leading to the island in the lake and Whakamaru Christian Camp, finishing site of the race.

Gerry and I all smiles, happy to have survived The Taniwha. 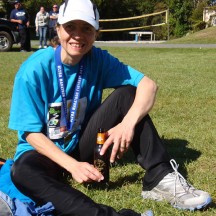 With a beer in hand the pain is almost already forgotten.

Here’s a funny story. On our way to the start of the run, our 65 seater bus suddenly pulled over and a girl and guy jumped up and urgently stepped out of the bus. Everybody was like, huh?, but as they made a beeline to the nearest bush, laughter set in at the familiar sight. A girl has to go when a girl has to go. It turned out her husband had a chat with the bus driver a few minutes earlier asking him to make a pitstop and the driver kindly obliged.

The Taniwha (meaning protector or guardian of the river) is organised by Auckland based sporting events management company Total Sport and a host of distances are available to walkers, runners and cyclists alike. For the cyclists there’s 83, 60, 42.2 and 22km events with the 83km also available as a team relay. The runners have 60, 42.2, 21.1, 14 and 7km options with the 60km also as a team relay option. Walkers had the choice between 21.1, 14 and 7km routes. Route markings were excellent – there’s no getting lost, and the water stations were well stocked with water and GU Brew. The drink station at about 37km also offered Coke, bananas, pretzels and sweet biscuits.

Things have a way of creeping up on you, don’t they (like unexpected pitstops! :-))? This run was one of those. It was months off, so far in the future that I almost forgot about it, when suddenly, boom, we were at the start of a 60km run. Not as well prepared as I would have liked, but nevertheless, there we were with 46 other runners. It was a perfect sunny morning in the Waikato and although still a wee bit fresh for me, some of the old hands were worried about the impending heat. Secretly I couldn’t wait for a chance to feel the kind of heat that makes you sweat profusely, feeling exhausted, hot and drained, where the only thing you want to do is sit in a stream with an ice cold beer. Mind you, I’d still prefer it if that stream was hot. 🙂 I haven’t experienced heat – I’m talking really really hot, 40+ degrees Celsius hot, in a very long time.

This distance was a first for us. We’ve done 50+km trail runs and a 56km on-road (but that hardly counts as it was in 2003), a 230km multi day event, 60km relay, etc, but never before a 60km (or further) in one go, on a trail. If I wasn’t still half asleep, I would surely have been sh*ting myself as we stepped off the bus.

All I can say is, ultra running is tough. I don’t know how people run 60km and after having done it myself, I still don’t know how people do it. Running 100 or 160km (or further!) is completely unfathomable. But you somehow find yourself at the start and then by hook or by crook manage to get through it. The how remains a mystery. What scares me even more is that this was an “easy” 60km trail run. What am I going to do if the Tarawera (our 100km trail run target race on 7 February 2015) surprises us with tougher, more technical terrain?!

We started off outside a paddock on a sealed country road, the Waotu South Road. For about 2km the road winds uphill, giving runners time to sort themselves out, before turning off onto the trails. A steep downhill stretch with sharp switchbacks takes you almost to the lowest point on the course (there is a point further down the path that is a wee bit lower, but only marginally). Luckily the difference between the highest and lowest points on the course is only about 250 metres. Apart from a few uphill sections, the course is mainly flat to undulating on the Waikato River trails. Easy, aye?

We decided to approach the run very conservative, running the flat and downhill sections, while walking all up hills. I was hoping to conserve some energy for the second half, but let me tell you this; after 27km, you are buggered. Your legs and body are sore, feeling as if life has been squished out if them, and there’s nothing you can do about it. I was pretty much stuffed at 25km, and that’s how I stayed for the remainder of the run, with gradual deterioration thrown in for good measure.

A few short sections are covered on sealed/cement roads with the most significant stretch roughly between the 32 and 37km points, which also marks two of the five water points (the other three being at about 18km, 48km and 56km). This was my least favourite section, having to be on the lookout for cars. And at this point, that turned out to be a challenge. But back on the trails I was again amazed at the impressiveness of the Waikato river trails. For miles and miles (around a 100km to be more precise) these wonderful trails follows the Waikato River on either side through plantations and forests, with well formed and laid out tracks for cycling, walking, running. I cannot begin to think how much time and energy must go into building and maintaining these. Kudos to the Waikato River Trails Trust for making the effort – a project that been going for the past 11 years. Wonderful stuff and I’m very jealous that we don’t have that playground on our doorstep. As described on The Taniwha web site: “The Waikato River Trails wind their way along a path that captures the essence of the natural beauty of New Zealand – native bush, exotic forest, historic landmarks, interesting geological formations, open reserves, boardwalks over wetlands, and stunning single track taking in expansive lake and river views throughout.”. As you run past, through or across Lake Arapuni, Waipapa Dam, Maraetia Power Station, the historic river side town of Mangakino, Whakamaru Dam, Lake Maraetai to finish at the Whakamaru Christian Camp, situated on its own Island surrounded by the clear waters of Lake Whakamaru, you are constantly reminded of the beautiful environment and to help keep your mind off the difficult task at hand.

While Gerry was again busying himself documenting the visual side of our run, I could concentrate on moving forward. Which I might add became extremely difficult. It holds true, as they say, that ultra running is 10% training and 90% a strong mind. And when you’re on a fairly easy course expecting to do okay, but then discover that you can hardly manage 8.5 minute kms, your mind goes AWOL. It just can’t accept and comprehend the setback and constantly wants you to give it all up for a bad job. Gerry was doing great, feeling strong and had a raw deal trying to cheer me up as I turned all his positive comments into negative ones. I am extremely grateful that I didn’t had to battle the mind monster on my own. Thanks Dear!

If I have to make one negative comment, it is the fact that the cyclists started after the runners, meaning they all had to pass on sometimes rather narrow trails. Trying to be on the lookout for cyclists coming from behind can be stressful. But luckily there were only about 120 cyclists that had to pass, and on some of the quieter sections a bit of banter with a passing cyclist helped keep one’s mind off the task at hand.

In the end we were quite relieved to make the 9-hour cut-off, finishing in 8:27. Still, a very long day out indeed. Will I do it again? Hell yeah! I have no intentions of letting go of my Tarawera entry just yet.