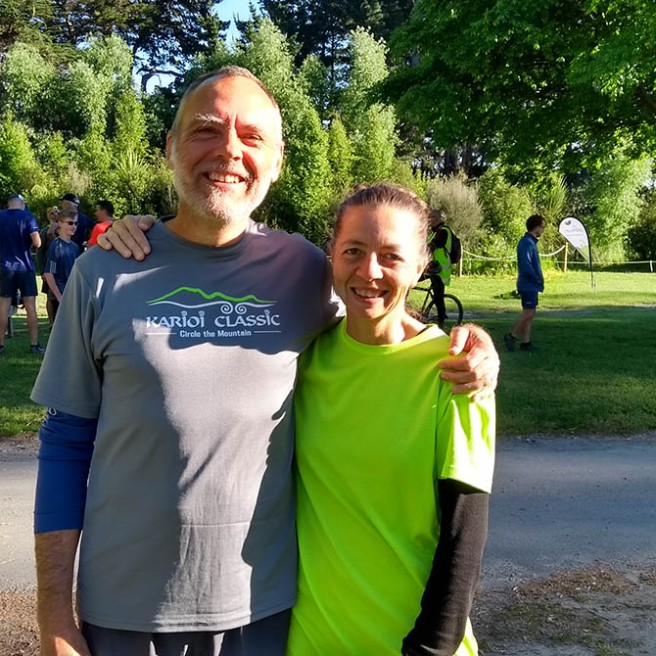 At the start, having a quick chat with Gary (who also offered to take our pic – thanks Gary!).

73 runners and walkers gathered for this weeks parkrun.

Shortly after the start and we were right at the back with one or two others.

Off-road all the way.

The speedsters are already on their way back.

A beautiful morning for it. 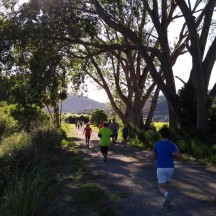 The Tararuas in the distance. 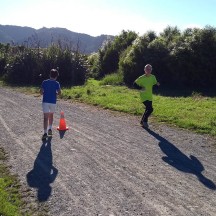 Finally at the turn-around point.

Despite a faster split on the way back, we were still quite “alone”.

Passing under the new SH1.

For more than six years, we’ve been driving down to Wellington on Saturday mornings for work. Not every Saturday, but on average about ten to twenty times per year. And for the past many years, we spoke about how we should leave earlier and do a parkrun on the way down. Having to work on a Saturday, is bad enough, let alone having to get up very early to drive down and still be in time. To fit in a parkrun would mean getting up even earlier, which sounded like pure torture. And with Fridays being, well, Fridays – the end of the week, time for a glass or two, movie, late night, contemplating the week and philosophising about life into the wee hours of the morning – getting up early on a Saturday is the last thing you want to do. And getting up really, really early is the very last thing you want to do.

After the inaugural Palmy parkrun, I think Gerry got some renewed energy to fit in a parkrun on the way down (there’s two on our trip to Wellington: Kapiti Coast and Porirua). It almost feels rude not to do it, especially since the Kapiti Coast parkrun is where we are registered (Palmy didn’t have one when we signed up a couple or years ago). And so finally, we made it happen. Still can’t believe we got out of bed in time.

This was only my third parkrun. Starting in Otaihanga Domain in Paraparaumu, the 73 participants followed the out-and-back course along the Waikanae River on a lovely, sheltered, off-road footpath. Although the gravel path is good for the most part, some sections are quite uneven with large-ish gravel/stone, which would be better suited to trail running shoes than Gerry’s minimalist Nike Flyknits! But, that is really no biggie – any ol’ shoes will do the trick. It is only 5km after all.

We started off way too fast. After a couple hundred metres, Gerry asked if there was anyone behind us. I was aware of one other person, and despite me running at the speed of light, huffing and puffing while I tried to catch my breath, we were right at the back of the field.

After about 2kms of panting and trying to actually be part of the field, my body finally woke up and I managed to have a more comfortable run at a faster pace in the second half. If I was a speed-demon and someone who seriously worried about my times, a warmup would have been a good idea. I’m used to long and slow, so there’s usually really no need to exert myself with a warmup!

The weather could not have been more perfect. A beautiful, sunny, windless morning for a parkrun – a perfect way to start the day (and weekend). I believe some people may have stayed behind for a post-run coffee at the coffee cart at the finish. We didn’t see or smell any coffee, but were in too much of a hurry to get going anyway. At Porirua, we stopped for a wetwipe-shower and some clean clothes to get on with the rest of the day.

Who knows, maybe we can get up even earlier and fit in the Porirua parkrun on our next working weekend in Wellington!