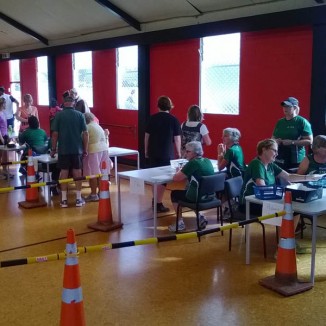 We arrived early before the registration area gets too busy. 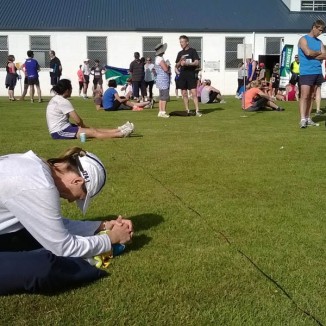 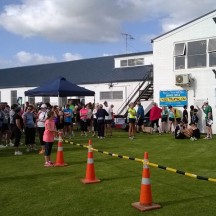 Announcements before the run. 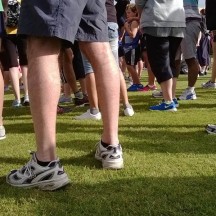 Lots of eager legs ready for the start. 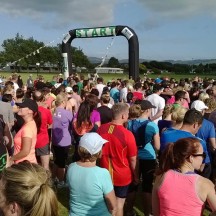 The masses at the starting line. 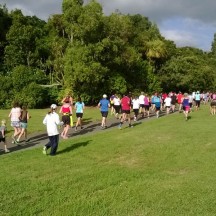 Running along the Bridle Track next to the Manawatu River. 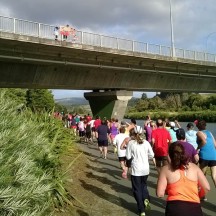 Runners getting moral support from atop the Manawatu bridge. 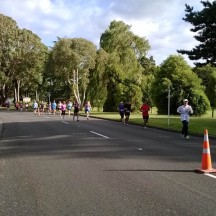 The return leg, through the leafy suburb of Hokowhitu. 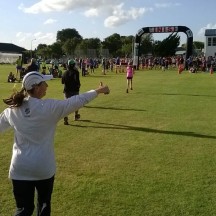 Thumbs up for another great event. 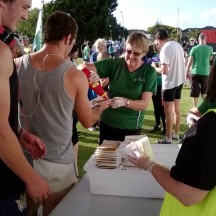 The sausage sizzle is a post-run highlight. 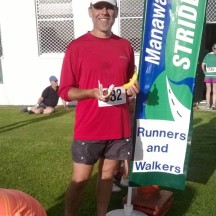 It’s summer in the Manawatu, and the Super Seven Series is under way. As reported in the local newspaper, the Manawatu Standard, “You know it is summer when the Striders Super Sevens starts up again.”

Tuesday evening we participated in the first of the 2014 series of runs (seven races of seven kilometres each) taking place on consecutive Tuesdays through January/February. And what an evening it turned out to be, with the rather foul weather of the previous few days making way for a lovely, balmy evening in Palmy. Which may in part explain why a whopping 1 659 people turned up.

With attendance numbers like that at the first evening, the organising club, Manawatu Striders, are hoping they may break the 2000 mark before the end of the series!

What made the evening extra special for us was that it was our first Super Seven event run as members of the Striders – we joined the club a week ago, so when it came to registering, we could go straight to the ‘Fast Track Line – Members Only’ table, where we not only received our race numbers, but also welcome packs containing a magazine, breakfast bar, welcoming letter, and info on a bunch of upcoming events in the region.

The run got underway promptly at 6:15, with the mass of runners charging across the Ongley Park sport fields towards the path next to the river where the first half of the run happens. As can be expected when thousands of people try to simultaneously enter a rather narrow path, there’s bound to be some congestion, so it was no surprise when we were reduced to a walking pace for the first part of the narrowing path. Luckily things eased up quickly, and we were off running again in no time.

After the starting dash across the sports field, the first half of the run follows the Bridle Track along the Manawatu River in an upstream direction, passing under the Manawatu bridge towards the north-east. The scenic path next to the river makes for a most enjoyable run, and it really is great sharing the path with hundreds of fellow runners. Around the halfway mark, the course makes a left turn, away from the river and into the suburb of Hokowhito. It is here that you also encounter the first water station on the road – a welcome sight on a warm evening. The second half is run on a public road, but thankfully half of the road is cordoned off, so it’s still a very easy and comfortable run. Shortly after the 5km mark, you pass under the Manawatu bridge again, and after following a winding path through the local esplanade and passing another water station, you finish with another dash across the sports field towards the finish line back at the YMCA at Ongley park.

At the finish we were treated to a banana and a sausage sizzle – amazing value considering the races only cost $3 to enter.

We managed the seven kilometres in a 6:10 pace, finishing in a time of 43:15. So that’s the time to beat in our next run in the series! We will unfortunately not be able to attend next week’s run due to previous commitments, but we can’t wait to be back for our next run in 2 weeks’ time.