It’s January, and if you’re a runner in the Manawatu, that means one thing – it’s time for the Super Seven Series!

Starting a week from today, the Super Sevens consist of 7 weekly runs of 7kms each, run every Tuesday afternoon from 14 January to 25 February. By far the biggest race series in the region, between 1400 and 1500 people from Palmerston North and its neighbouring towns turn out every Tuesday for a run along the Manawatu river. While I’m sure there’s some serious racing going on at the front of the field, for the most part it’s a laid back, social event, with participants of every shape and size joining in on the fun. 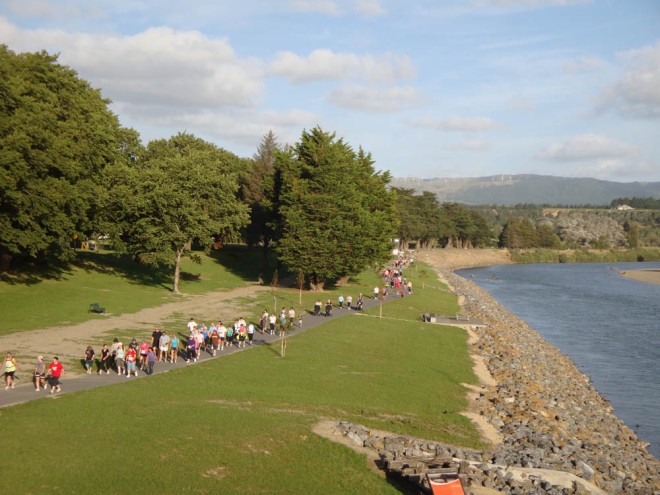 Hundreds of people next to the Manawatu River on their way back to the finish.

Despite the fact that a large percentage of the local population runs/jogs for exercise (no matter the weather, you always see people out jogging, alone, in groups, with pets or with baby-joggers), a lot less people tend to enter races – not sure if this is because races are generally too competitive, or because they’re too expensive.

Whatever the case may be, it does not apply to the Super Sevens. Just about everyone who owns a pair of running shoes (or any other sort of sneakers) comes along for each Tuesday’s run. I think it has to do with the fact that it is such a fun, social get-together. And I’m sure the cost also helps – entries are a measly $3 per run or, if you pre-enter for all 7 events, just $20 in total. And to make it even more of a bargain, this year the hosting club, the Manawatu Striders, have announced a new deal where, for $30, you get entry to all 7 runs AND membership to the club (as long as you have your entry in before the first run of the series on 14 January). Such a bargain – we just couldn’t let it pass. So, after a very well-spent $60, Wouna and I are now entered for the 2014 Super 7 series, and members of the Manawatu Striders. Whoop-whoop!! Really excited about what our year as members of the Striders will hold!

While I know it’s unlikely that we’ll be able to do all seven runs (something always comes up that keeps us from getting to all of them), we certainly hope to complete the majority – we will post updates on our progress each week on the blog. We’ll still decide whether we’ll treat some of the runs like time trials to see how fast we can cover the distance, but whatever we end up doing, I have no doubt it will be great to just be out on the road with masses of fellow runners.

If you’re in the region, do join us! Even if you’re far away, on a different continent, why not join in (in spirit) and go for a 7km run each Tuesday for the next 7 weeks. And let us know how you’re doing!